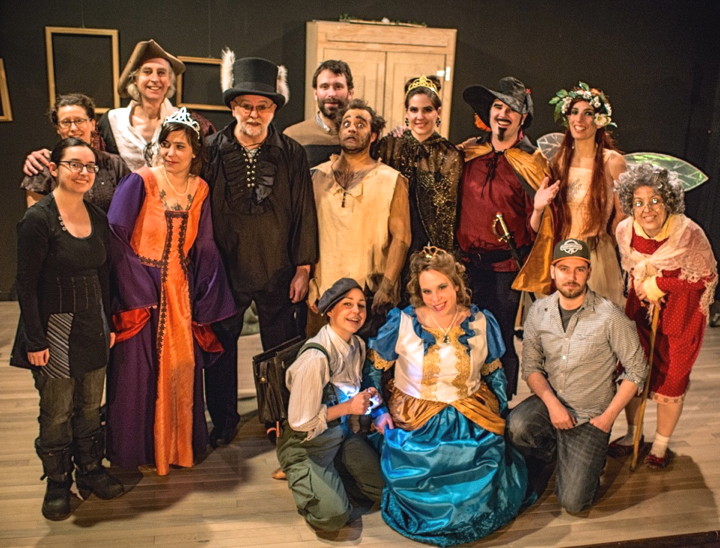 The curtain went up on Iqaluit’s newest theatre company this month, thanks to the efforts of Yoan Barriault.

The French-language Théatre Uiviit took flight March 21 and 22, when Barriault — founder, artistic director, and actor — opened performances of the company’s première show to capacity audiences at the Iqaluit francophone centre.

Incorporated in February, Théatre Uiviit includes a crew of amateur actors and production artists from the city who perform in French.

“Uiviit” takes its name from the Inuktitut word for “the French people.” It is derived from French word “oui,” meaning “yes.”

Subtitled in English, the production Les z’aventures de Zozotte (Ze Adventurez of Zozotte), drew more than 50 spectators at the première, and about 80 at a dinner-theatre performance the next evening, Barriault said.

“About 15 per cent of the audience were just anglophone[s], and they liked it,” the director said. The company’s Facebook page shows English-speakers are highly interested in the play as well.

Judging from requests for more information in English after the play’s première, Barriault said he’s “really expecting more anglophones to come” for the final two performances, March 28 and 29.

Barriault, a long-time teacher at Trois-Soleils School in Iqaluit, hopes Théatre Uiviit will serve as an anchor for theatre productions and workshops in Iqaluit.

“The plan is that by incorporating the group, we’ll be able to apply for grants and produce at least one show for the community every year,” he said. “Eventually we will create original productions, written and made by people from Iqaluit.”

In the long run, Barriault hopes to draw other small “emerging” theatre companies from throughout Canada to perform in Iqaluit.

“A third goal would be to offer, on a regular yearly basis, some workshops on training about theatre,” he said. These could include workshops on mime and comedy, as well as technical aspects such as lighting.

Workshops would encourage theatre enthusiasts to become involved with theatre in Iqaluit.

“The first mandate is to produce theatre in French,” Barriault said, “but also to include, as much as possible, other communities.”

Subtitles for the company’s first production are essential for that purpose.

Audiences will easily recognize characters in Ze Adventurez of Zozotte, Barriault said, because they are drawn from fairy tales all generations would have heard in childhood, or seen in mass-market animated productions by large U.S. production companies such as Disney and DreamWorks.

The play’s key characters are from the works of 17th–century French author Charles Perrault, and they include Puss in Boots, Cinderella, Sleeping Beauty, and the Big Bad Wolf and the Grandmother from Little Red Riding Hood, among others.

These characters are magically transported out of the fictional world and into the real world, where they appear in an old theatre.

An eight-year-old boy Louis-Arnaud discovers these characters in the theatre, and must “help them go back to their books,” Barriault said. To do that, he must find his friend Zozotte, an elderly woman who told him the stories of all of these characters.

Written by Ottawa-based playwright Jennifer Turgeon-Charest, Barriault said the play carries the message that these stories won’t die so long as they are kept in print, in the fairy tale genre of literature.

“It’s a reflection too on the ‘Disneyfication’ of these characters that has been made, let’s say over the past half-century,” the theatre director said.

“All these characters have been put into movies for kids, but they have lost their essence.”

Puss in Boots, for example, is known to have a Spanish accent among kids who have seen the DreamWorks production of Shrek. The character of the play finds himself speaking in a Spanish accent instead of a French one.

“He says if he speaks in his own French accent, nobody would recognize him!” said Barriault.

The theatre director also plays the role of Puss in Boots in the production.

Théatre Uiviit’s final two performances of Les z’aventures de Zozotte at the Francophone Centre in Iqaluit will run Friday, March 28, and Saturday, March 29 starting at 7:30 p.m. each day. The production includes simultaneous translation, with English subtitles projected above the stage. ,