Jorggáhallan, “a journey of spiritual movement, learning and enjoyment” 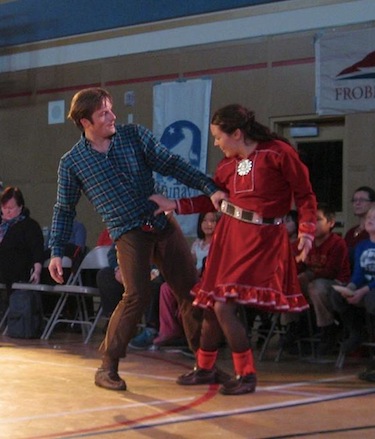 Although there is no specific word for “dance” in the Saami language, Saami, the indigenous people of northern Europe, nonetheless had dance moves for almost every occasion.

And that’s what Saami dancer, choreographer and filmmaker Elle Sofe Henriksen of Kautokeino, Norway showed in Iqaluit Sept. 21 during the Canadian première of her work, Jorggáhallan, in Iqaluit.

In two performances, Henriksen and co-performer Thomas Gundersen introduced audiences to the Saami world with a work that tells the story of a Saami couple’s courtship.

On entering Joamie Elementary School in Iqaluit, members of the audience took their place in chairs around the gymnasium, which had been transformed into a dance floor. There, scene was set for a fireside chat with Saami elders, topped off with coffee and cake.

“I invite you to a journey of spiritual movement, learning and enjoyment,” said Henriksen, wearing a bright red Saami dress, as she opened the show with a short documentary.

In the documentary, Saami elders from northern Norway describe the special movements and gestures which their people made in the past, before the arrival of roads and permanent settlements.

Then the Jorggáhallan dance began, starting with the dancers’ first gesture — a blessing of the performance’s venue. Hands extended skyward, the performers glided around the dance floor, clapping and stomping occasionally.

The ritual recalls a practice by the Saami asking permission to be in a new place, said Henriksen.

“Everywhere in the land, even though we come here, we might not own it,” Henriksen told Nunatsiaq News after the show.

“If we’re going camping, for example, it is a tradition to ask for permission, just as though you are asking for a blessing for your stay there. It’s kind of respectful for the spirit that might be in that place, to say who you are and ask for permission to be there.”

The audience was included in the ritual, as the performers lightly embraced several members in a gesture of greeting.

Henriksen and Gundersen then told the tale of a couple, starting with a playful pulling game that youths would play. Audience members were drawn into the game too, as the dancers pulled many out of their seats to take the places in a never-ending match of musical chairs.

The couple’s relationship then moved to its next levels in a series of dance movements, eventually ending in marriage and a circle dance with the whole audience.

Henriksen’s show grew out of her ongoing research of her people’s cultural traditions, which are slowly disappearing with the passing of Saami elders, she said.

“It’s so important to document the knowledge that our elders have now, because they grew up in a traditional society, before there were roads into our village, and they were living on the tundra,” said Henriksen.

Elders aged 55 to 85, as seen in the filmmaker-choreographer’s filmed interviews at the start of Jorggáhallan, have experienced both the traditional world and modern one “where we have cars and houses,” she said.

“So their knowledge is unique and I want to document it, before it’s too late.”

As a filmmaker, Henriksen has also produced creative short films rooted in Saami culture which have screened at film festivals around the world.

These include the impressionistic, the Wind Whispers, a dance performance based on the work of renowned Saami poet, Nils-Aslak Valkeapää, and the Yoiking Hand, an experimental documentary on Saami singers’ gestures.

Henriksen said her next project is a dance film on mental illness and suicide — also present among Saami in northern Norway.

Presented by Alianait arts festival, Jorggáhallan was made possible by funding from the Norwegian Embassy in Canada.

The show’s only Canadian date, in Iqaluit, drew audiences of more than 200 in two shows at Joamie School, Sept. 21, organizers said.

The show has toured Scandinavia and northern Russia since 2012.