Circus acts, bluegrass fiddles, Afro-Brazilian beats and kiddie pop all on the menu 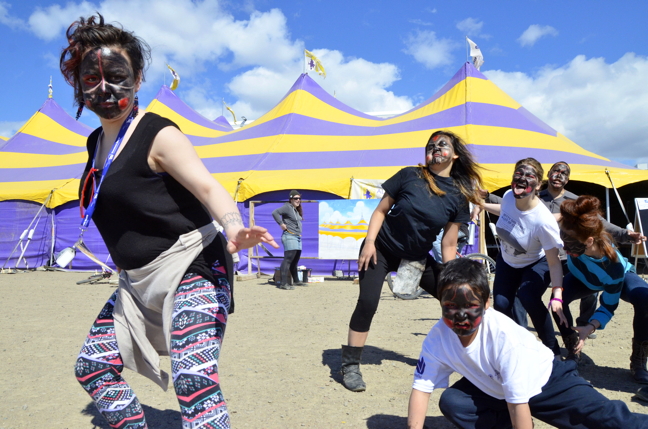 Kathleen Merritt, left, and a gang of Greenlandic mask dancers, terrorize the general public outside Alianait’s big top tent at the 2014 Alianait festival. Performers are set to take the stage starting tomorrow, June 26. The festival runs until July 1. (PHOTO BY DAVID MURPHY)

Nunavut’s largest music and arts festival starts in 24 hours in Iqaluit and executive director Heather Daley is busier than ever.

She sounds hurried on the phone, but still excited — like a kid planning a trip to Disneyland.

“There’s a number of things,” Daley said about what she’s looking forward to most.

“Having Nanook come here, the most popular band in Greenland. Really excited about that,” Daley said.

“And David Myles, who was here a year ago, and having Agaaqtoq on the same stage as him. Fantastic,” she said.

You can catch that show, which includes the Toronto bluegrass band Slocan Ramblers, at Nakasuk School June 27 at 7 p.m.

But what’s new with Alianait? What’s going to set this year apart from the rest?

“We’re bringing in young artists from Greenland, Nunavik, and all across Nunavut together to spend four days with Sylvia Cloutier to collaborate and come up with a unique performance,” Daley said

Hopefully not the last, she adds.

“We’re now calling ourselves the world’s circumpolar stage and [we] also really wanted to focus on youth and emerging artists.”

That youth concert is slated for Tuesday, June 30, also at Nakasuk School.

That’ll be in collaboration with the Artcirq cabaret circus — which endures as one of Alianait’s most popular spectacles, Daley said.

“Artcirq is always a huge hit for this festival. And this year we’ve got five Artcirq performers coming from Igloolik and then we’ve got four acrobats, including Guillaume Saladin, the founder, coming from Montreal,” she said.

Long-time collaborator Yamoussa Bangoura will also join them after a five-year absence.

“We’re bringing him because there’s a new documentary film about Guillaume and Yamoussa. And how they connected through circus arts and come from different corners of the world,” said Daley, “Guillaume from Igloolik, and Yamoussa from Guinea in Africa.”

That documentary, called Circus Without Borders, screens at the Astro Theatre June 29 at 6:30 p.m. and is free of charge.

Workshops are always a big part of the festival as well. That’s when artists and performers get thrown together on stage to perform together, play on each other’s songs and collaborate in front of a live audience.

“And actually it’s one of the young Greenlandic performers who’s going to lead that workshop. So that’s really fun,” she added.

“This is going to be with David Myles, The Sweet Low Downs, the Slocan Ramblers and Koel,” she said.

“Anyone who wants to sing along with people who do fantastic harmonies or just listen, will be really moved by that.”

To see the complete guide of all the concerts, art exhibits, workshops, dances, children’s events, spectacles and more, view the schedule here.