“The forces of nature can suddenly change” 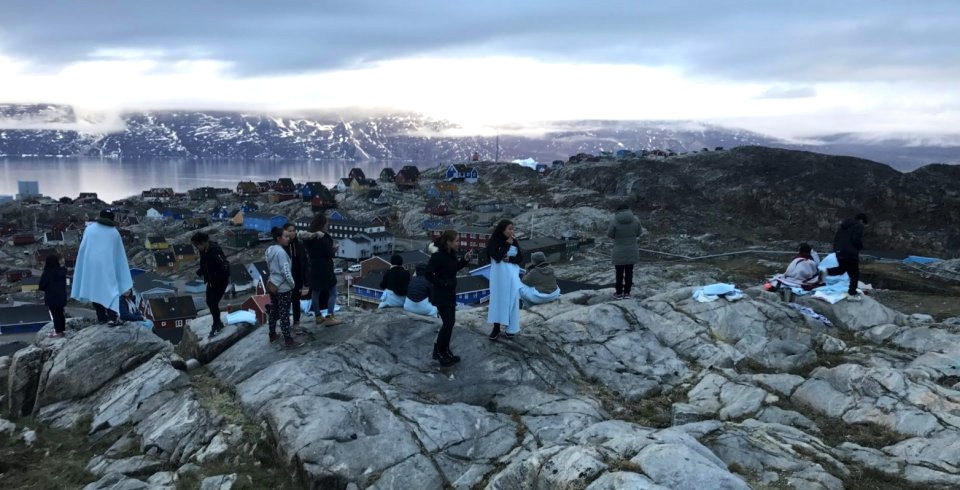 In Uummannaq, Greenland, people head up to mountains above the community of about 1,200 people for safety after a tsunami warning during the night of June 18. (PHOTO BY I. HEGELUND/ SERMITSIAQ.AG)

A June 18 tsunami along Greenland’s northwestern coast, facing Baffin Island to the west, has left two people seriously injured, seven slightly injured, four people still missing and 11 houses in the village of Nuugaatsiaq, population about 100, completely destroyed or swept out to sea.

The toll of this past weekend’s tsunami in northwest Greenland might seem small when compared to the 2004 tsunami in Asia where more than 200,000 died but for people in Greenland, with its large landmass and relatively small population, the pain and response to this unexpected natural disaster and shared loss has been huge—similar in scale to the 1999 New Year’s Eve avalanche in Nunavik, which killed nine, injured many and wrecked buildings.

Everyone on the close-knit island has reached out with donations of money, goods and artwork, as well as with prayer vigils, to help and support those who lost their relatives, homes and belongings as water poured into Nuugaatsiaq at about midnight June 18. Air Greenland and shipping companies have also mobilized their fleets to help send in relief, while the Royal Danish Air Force has sent a Hercules to assist.

“It’s hard to believe what happened last night,” Greenland’s Prime Minister Kim Kielsen said in a June 18 Facebook post. “After the earthquake in Nuugaatsiaq we were made aware that the forces of nature can suddenly change… what happened is tragic and my thoughts are with everyone from Nuugaatsiaq.”

In this YouTube video, the sights and sounds of residents fleeing from the wall of water, while dogs can be heard howling in the distance, communicate the magnitude of the event.

After learning about the tragedy affecting Inuit across the Davis Strait, many Nunavummiut responded with messages of love and support.

“Our thoughts and prayers are with our neighbours,” said Nunavut Premier Peter Taptuna June 18 in a tweet.

Due to the possibility of further aftershocks and waves, evacuations by helicopter and ship emptied the villages of Illorsuit, Niaqornat and hard-hit Nuugaatsiaq, only 30 kilometres from the epicentre of the landslide which triggered the tsunami, to the larger community of nearby Uummannaq.

Police assured residents that they would look after any dogs left behind.

Police in Greenland continue to warn residents of other nearby communities to keep an eye on water levels and to listen for sirens warning of an imminent tsunami: “If the water rises or siren sounds, immediately head up the mountain.”

At midday June 19 police warned boats to stay out of the Uummannaq fiord area due to the risk of further tsunamis.

House swept away by the tsunami in Uummannaq area. Photo: Søren Lund pic.twitter.com/vqUXRj7ERD

It’s not the first time that a tsunami has struck the western coast of Greenland—the last large one was recorded in November 2000 around Disko Bay.

Nunavut historian Kenn Harper has written about at least one other incident recorded by the missionary Reverend Edmund Peck, known as “Uqammmak” to Inuit.

Such giant waves, that is—”harbour waves” or “tsunamis,” as they’re called in Japanese—are often triggered when the sea floor moves up.

But landslides into or under the water can also cause tsunamis—and this is what is now suspected to have taken place June 18 near Nuugaatsiaq where part of a mountain, 300 metres by 1,000 metres, fell into the water.

These landslides can also be set into motion by earthquakes, volcanoes or large meteorites—all of which can and have occurred in the high latitudes.

In the last century, three of the 10 largest earthquakes in the world took place in Alaska, and these produced deadly tsunamis.

In 1958, a landslide caused by an earthquake sent a tsunami 524 metres high into Lihuya Bay, killing several fishermen and stripping the fiord of vegetation.

While tsunamis are more common in the volcanically active Pacific region, about 8,000 years ago a massive undersea landslide off the coast of Norway sent a 10-metre wall of water into the northern coast of Europe.

This landslide, the Storegga Slide, could have been triggered by warming sea temperatures—and it may have raised water temperatures even higher because deposits of undersea methane, a greenhouse gas, were released into the water at the same time.

The Geological Survey of Denmark has confirmed that the movement of the earth registered June 18 in northwestern Greenland was equivalent to a magnitude of about 4.0 on the Richter scale, which measures the severity of earthquakes.

That’s less powerful than the Jan. 9 earthquake which rocked northern Baffin Island and the High Arctic.

Over the past 80 years, about 2,000 earthquakes have been recorded in Nunavut. But earthquake experts say the presence of sea ice can lessen the impacts of most tsunamis in the Arctic.

If you want to make a donation to the relief effort underway in Greenland, you can make a bank transfer, using the following information:

Or you can make a donation through an online fundraising site.