“It’s not about falling between the cracks, because it’s almost like deaths like Jake’s have become normalized” 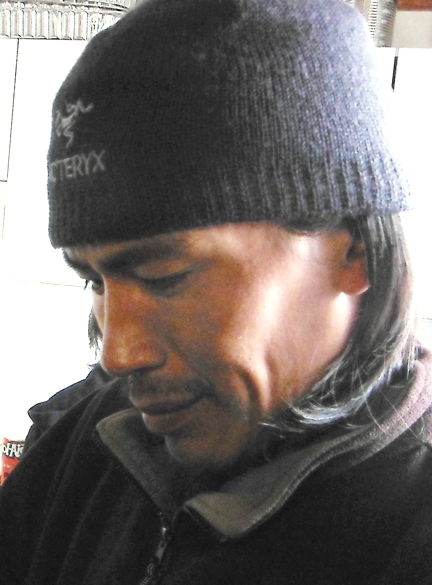 Jake Angurasak, whose biological family lives in Naujaat, was raised by an adoptive aunt but spent many nights at Iqaluit’s men’s shelter after she died. (HANDOUT PHOTO)

A couple of summers ago Jake Angurasak, whose frozen body was found recently outside Iqaluit, visited his biological family in Naujaat.

“When he was here, he was very happy with his siblings—that’s how I’ll remember him,” Angurasak’s biological mother, Rebecca Tuktudjuk told Nunatsiaq News from her Naujaat home Dec. 20.

“He visited us to be close to us and to his grandparents. He used to go out hunting,” Tuktudjuk said.

Iqaluit police and community members ended a one-day search Dec. 18 after finding Angurasak, 29, dead about 10 kilometres outside of Iqaluit.

Angurasak—whose name spelling we confirmed with Tuktudjuk—often slept at Iqaluit’s homeless shelter for men in recent years and was last seen Dec. 4, the Iqaluit RCMP said.

Tuktudjuk said her son was raised by an aunt.

That aunt, Angurasak’s adoptive mother, fell ill a number of years ago and moved to Iqaluit. Angurasak joined her in Nunavut’s capital, but she died shortly afterward.

He therefore never held a job or received any social assistance.

Despite his overlooked existence, there’s nothing that should be considered normal or acceptable about Jake Angurasak’s homelessness or death, the president of the organization that runs the men’s shelter told Nunatsiaq News Dec. 20.

“It’s not about falling between the cracks because it’s almost like deaths like Jake’s have become normalized… As a society, we’re not focusing enough effort to fill the gaps that catch people before they fall,” the Uquutaq Society’s Janet Brewster said.

The society helps men who stay at their shelter as much as they can, including by encouraging them to apply for services and rights they are entitled to, Brewster said.

“But the truth is a lot of these men deal with trauma related to government systems. There’s a lot of mistrust there.”

The Uquutaq Society is working with the territorial mental health unit in Iqaluit and local police to develop information-sharing protocols to help keep a lookout for Iqaluit’s homeless men, Brewster said.

But efforts to improve supports for their clients are seriously constrained, she added.

For example, due to the society’s agreement with the City of Iqaluit, the men’s shelter must shut its doors to homeless men between 8:30 a.m. and 5:30 p.m. every day, including during the coldest winter months.

That limits the working relationship with the Government of Nunavut’s mental health unit, which operates exactly between those hours, Brewster said.

Those restricted hours also mean the shelter cannot offer any programming during the day such as workshops on basic life or employment skills, added Brewster, who said she herself was living in a women’s shelter in Ottawa 14 years ago.

Brewster said one thing that helped her leave the shelter was a daily group therapy session.

“Having the opportunity to access counselors on a daily basis was very effective in moving me from shelter living back into a working and safer situation.”

That’s something Brewster said the GN could change if the territorial government took a serious look at the generous housing subsidies that it pays to its mid- and high-level employees, almost all of whom are non Inuit.

“We have probably the most subsidized employees in the country working for the government, at the expense of our citizens. If we looked into those subsidies, I’m sure we could actually build a shelter.”

But Brewster also takes personally the responsibility of helping some of Iqaluit’s most at-risk citizens—its homeless men.

Brewster said she wished Inuit organizations, government, non-government and even citizens would consider it personally too.

“The question is, who? Who should be responsible for looking out for our community if not me? If not me, then who?”

“It’s really easy for us as a society to forget that Ben [Palluq] went missing in 2014. And in September we were looking for [well-known carver] Lucassie [Etungat].”

Both men disappeared without a trace.

Brewster said the Uquutaq Society will hold its annual general meeting in late January and she encouraged Inuit men especially to attend or become board members.