“We’re not the answer… but in the meantime, we can help” 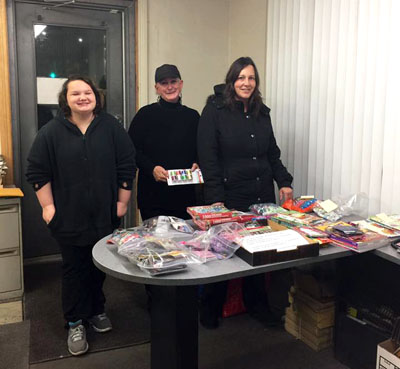 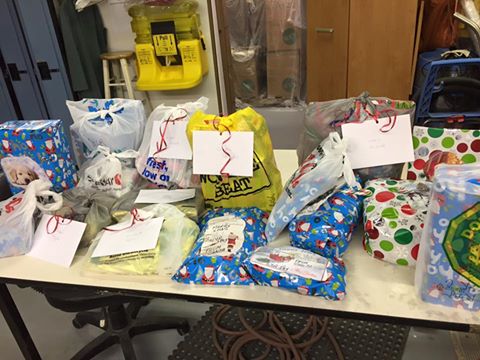 HONN volunteers in Winnipeg packages these goodie bags, to be handed out this week to patients staying at the Larga Kivalliq Inuit Centre. (PHOTO COURTESY OF C. OLFORD/HONN) 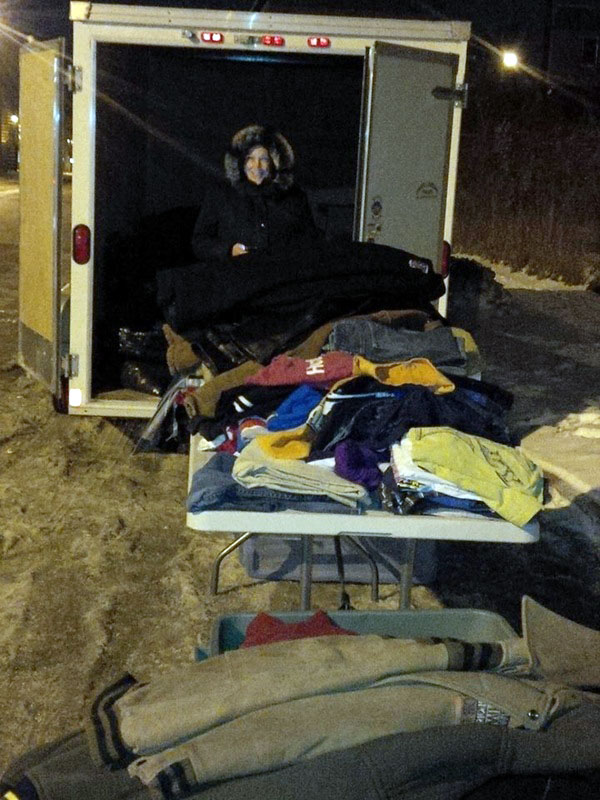 A member of Helping Our Northern Neighbours-Winnipeg and Eastern Manitoba sets up outside of the Kivalliq Inuit Centre in Winnipeg with clothing donations for patients staying at the boarding home. The group will be back at the centre this week with winter clothing and goodie bags for patients away from home for the holidays. (PHOTO COURTESY OF T. NEUBAUER)

For a time in early 2015, the Facebook feeds of many Nunavummiut were crowded with images of happy children and families surrounded by boxes full of food and household supplies.

When Helping Our Northern Neighbours first launched in 2014, the movement did what northern governments and organizations had never been able to do on such a wide scale: build awareness around the food insecurity issues facing many Nunavummiut families.

The online group’s numbers swelled to 12,000 last winter—a network of southern Canadians and some international donors. They’d be matched up with families in need, to whom they’d send regular care packages.

HONN has grown to over 15,000 Facebook members today and paired donors with hundreds of Nunavummiut families.

The group is still coordinated by Vancouver Island resident Jennifer Gwilliam, who estimates there are about 7,000 active volunteers and donors supporting a recipient list of 1,200.

“People come and go, but that number is about steady,” Gwilliam said.

“It’s always busy at Christmas time,” she said. “People always want to make sure food banks are stocked for the holidays.”

HONN is largely powered by the efforts of its most dedicated volunteers who work year-round with communities across Canada’s North, the majority of them in Nunavut.

Tereina Neubauer still remembers last winter when she first started learning about food insecurity in the North, discovering that more than one-third of Nunavut households don’t get enough to eat.

“I got extremely frustrated and upset,” she said. “But I thought, I might as well do something about it.”

Neubauer, who works as an office manager at a Winnipeg construction company, started a local chapter dedicated to sending food and other resources north.

Helping Our Northern Neighbours-Winnipeg and Eastern Manitoba has gradually grown to 500 members, 200 of which Neubauer calls “very active.”

More than two years in, members have experimented with the best and least expensive way to get food to the communities—Canada Post deals or gift cards for people to make their own purchases.

With the high cost of shipping cargo to the North, Arctic Co-operatives Ltd. has become a conduit for many of HONN’s donations, with southern groups sending gift cards or donations to the local stores, who in turn prepare hampers or donate items to local food banks.

Over the last 18 months, Neubauer’s group has paired up with the Tudjaat Co-op in Resolute Bay, where the group funds a monthly hamper program. Winnipeg donors pay about $12,000 a year for meat and potato hampers that go to 20 local families in need, which are packaged and distributed by the co-op store in Resolute.

“Every month they send us a deposit and we give out meat packs—hamburger meat sausages, chicken—and a bag of potatoes to residents in need,” said Tudjaat’s manager, Frank Jessome.

“It’s been an absolute success. People have come to rely on it.”

Jessome is able to identify the families most in need by flagging residents who receive social assistance and those who are clients of Resolute Bay’s food bank.

“People are so grateful. I hear it all the time: ‘I’m having a tough month, thanks for helping out. We look forward to this.’”

The hampers are just one of many projects the Winnipeg HONN group coordinates; when Nunatsiaq News spoke with Neubauer, she was busy wrapping Christmas gifts destined for elders and children in a handful of Nunavut communities.

The group is also able to offer Nunavummiut a hand right at home in Winnipeg; Neubauer collects used clothing, food and gifts to provide for patients staying at the Larga Kivalliq Inuit centre.

The group will set up outside the boarding home this week with winter wear and goodie bags for patients spending Christmas away from home.

“We have an incredible amount of people donating stuff,” she said. “Down here in the south, everyone has something in their closet they don’t need.”

Neubauer has no plans of slowing her fundraising efforts, but she acknowledges that donated food and supplies won’t ever lift Nunavut communities out of poverty.

“We’re nothing more than a Band-aid,” Neubauer said. “I think we need to find a way to manage their food insecurity issues. They have to tell us how to help.

“Our answers in the South don’t work there. We’re not the answer—and I really wish we knew what the answer was. But in the meantime, we can help.”

Gwilliam agrees; HONN’s support is meant to offer a boost to families in need, not to last indefinitely.

“The idea is to give them a break while they improve their circumstances,” she said. “We want to able to come into their lives for a period of time and help out, and then just maintain the friendship.”