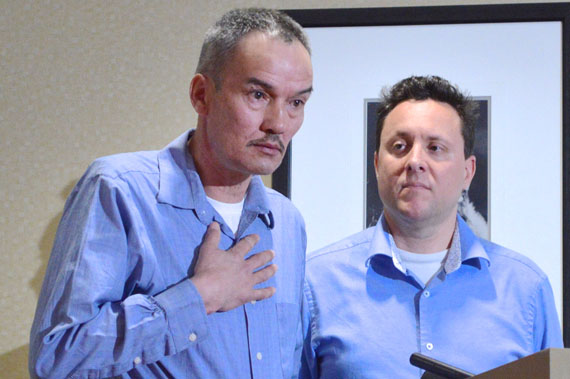 Adamie Itorcheak and Al Hayward of Sarvaq at a news conference May 6 in Iqaluit. (PHOTO BY STEVE DUCHARME)

If there’s a silver lining within Go Sarvaq’s aborted Iqaluit-Ottawa-Halifax air travel service, it’s that they succeeded in driving down prices for summer travellers.

They just didn’t expect their business to crash as a result, Go Sarvaq representatives said May 9 at news conference in Iqaluit.

“This was not an easy decision, it was one we as a team wrestled with when it became clear the market we entered on April 6 was drastically different on May 6,” said teary-eyed Go Sarvaq President Adamie Itorcheak.

“While we were not able to launch our service in the way we intended, we did bring greatly reduced airfares to this market — a big plus for Nunavummiut who want to travel south this summer,” Itorcheak said.

Go Sarvaq announced to ticket holders May 6 that it’s suspending its proposed air service, which started with an introductory one-way Iqaluit-Ottawa fare of $499.

Unprecedented seat sale discounts from competitor airlines Canadian North and First Air, as low as $399 per fare, delivered a fatal blow to the company’s scheduled launch on May 20.

“None of our team could remember the last time a sale like this was available, and neither could passengers, who called us on Thursday morning saying where we had previously been competitive on price, now we weren’t, and requested refunds,” said Sarvaq’s vice president Al Hayward.

Hayward explained that a another limited-time seat sale offer on May 4, when First Air offered seats for as low as $266, prompted Go Sarvaq ticket holders to demand refunds en masse the following morning.

The timing of that additional seat sale, said Hayward, was suspicious, because it came less than a day after Sarvaq mistakenly sold seats for $399 on their website due to a programming glitch.

“There was no advertising of this price done by us. However the response to these fares was seen on the night of May 4, when one of the legacy carriers dropped their rate to $266,” he said.

Refunds for all purchased seats from Go Sarvaq have been processed, Hayward confirmed, and customers will receive their money shortly.

And while executives did not outright call the seat sales launched by Canadian North and First Air predatory, they confirmed that Sarvaq is exploring the issue with the federal Competition Bureau.

“We contacted the Competition Bureau, because we wanted them to explore if there were forces at play from making the market fair and open. This is not a conversation that has stopped and one we will continue to have,” Hayward said.

“Ultimately, it is Nunavummiut who need to take their voices and make them heard, through channels like the Competition Bureau.”

To that end, the company provided a link May 6 on its Facebook and Twitter accounts to the Competition Bureau’s online complaint form.

And Itorcheak struggled to contain his anger when asked if First Air and Canadian North, both Inuit owned by birthright corporations, are doing a disservice to Nunavummiut.

“When there’s a flawed system right from the get go it’s pretty hard,” he said on the current state of territory’s airline industry.

First Air is owned by Makivik Corp., the birthright corporation created by the James Bay and Northern Quebec Agreement. Canadian North is owned by the Inuvialuit Development Corp., through the IDC’s holding company, Norterra.

“It is a form of war when you think about it… How much can I say without getting my balls squashed? They would love to squash my balls,” Itorcheak said

Hayward ended the press conference by saying the company will take time to “regroup and refocus.”

“We will continue to advocate for fair and affordable fares for Nunavut,” he said.

“We want to be a part of that conversation with you,” he said.

“The strong belief that the people in the region deserve more affordable pricing and service brought us here and those same factors will keep us engaged in trying to find other opportunities to make the model work,” Flair Air’s vice president of commercial operations, Chris Lapointe, said in a written statement.