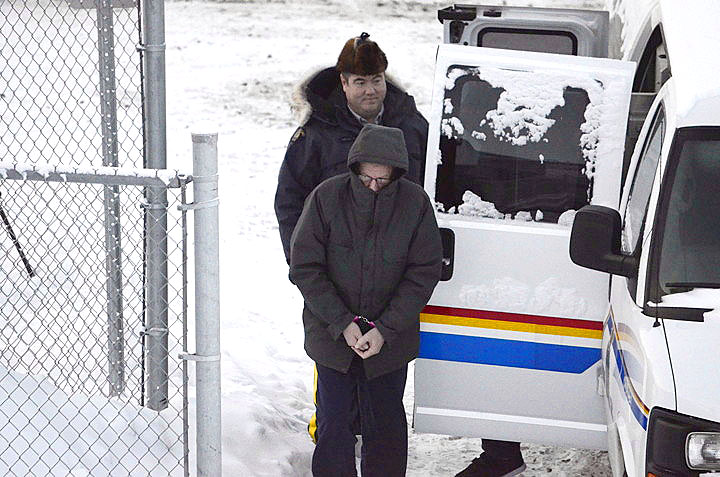 Wearing pink handcuffs, Eric Dejaeger steps out of an RCMP vehicle Jan. 20 at the Nunavut Court of Justice in Iqaluit. (PHOTO BY DAVID MURPHY)

At the Nunavut Court of Justice in Iqaluit on the afternoon of Jan. 20, Crown prosecutors opposed defence lawyer Malcolm Kempt’s motions for dismissal on seven of the dozens of charges against former priest Eric Dejaeger.

Kempt made 10 “non-suit applications” on the morning of Jan. 20, seeking dismissal of the charges because of a lack of evidence.

Justice Robert Kilpatrick quickly dismissed three of the 80 charges that Dejaeger faced prior to that morning because the witness who made the allegations did not appear in court to testify when the Crown was presenting its case.

Crown prosecutor Doug Curliss told Kilpatrick that for charges to be dismissed, there must be no evidence the alleged crimes could have happened, based on witness testimony.

To that end, in the context of the seven charges, Curliss, after reviewing transcripts of the witness testimony, argued that they still ring true.

One of the charges in question is an indecent assault charge — an assault with a sexual intent.

In that charge, Dejaeger is alleged to have placed a “little girl” on his lap and touched her.

Curliss, reading from a transcript, said the witness heard Dejaeger talk about little shirtless African girls in National Geographic magazines and told a group of girls that he thought they should all be more like them.

The charge alleges Dejaeger touched the girl on her breast — something Kempt has opposed.

Kempt felt there had been no evidence of touching on the breast, and said the witness had been a prepubescent child who had not developed full breasts.

But Curliss recounted how the witness said that Dejaeger warned her not to tell anyone about the touching, or else she would go to hell.

“Why would the accused say not to tell anyone?” Curliss said.

Curliss said if there were a jury, it would be plausible that they would consider indecent assault as an acceptable charge.

Another charge in question is an allegation that Dejaeger had sexual intercourse with a young girl.

For this, Curliss said the court has to consider “context and inferences.”

The allegation is that the girl was in a room by herself with the priest for a “sleepover,” when Dejaeger is alleged to have raped her after stroking her body and vagina.

Reading from a transcript of her testimony, Curliss said Dejaeger touched her and “it felt like I was being slowly ripped.”

The witness went on to say that it hurt so much, she blacked out.

Curliss said the testimony is enough evidence in context to consider that intercourse could have taken place.

Crown prosecutor Scott Hughes did, however amend two of the charges to lesser offences — but maintained both should not be dismissed.

Kilpatrick questioned one argument that Hughes made to support one assault allegation.

Hughes told the court that one of the witnesses said “he said he was going to do something bad to me” and “I had to do what he asked me to do.”

Kilpatrick questioned whether this was considered a threat of violence.

Kilpatrick said he will give oral decisions on the dismissal applications Jan. 21 at 9:30 a.m.

As of the morning of Jan. 20, Dejaeger faced 80 charges, eight of which he pleaded guilty to on day one of the trial.