Deline, NWT: The ‘birthplace’ of hockey?

Town challenged on its claim 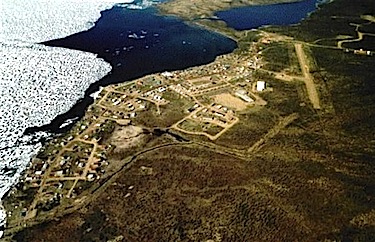 Deline, the small town in the Northwest Territories visited earlier this summer by newlywed royals William and Kate, the Duke and Duchess of Cambridge, has come under fire from hockey historians for repeatedly proclaiming itself the “birthplace” of the sport — the boast that prompted Prince William’s photo-op participation in a game of road hockey during the couple’s northern sojourn in July.

The community on the shores of Great Bear Lake, once known as Fort Franklin because it was established by the famed Arctic explorer Sir John Franklin in the 1820s, does have a legitimate claim to a place in the game’s early history.

But several top hockey historians — including two Swedish researchers who’ve compiled a huge database on the sport’s origins, and the dean of Canadian hockey history, Bill Fitsell — say the promotion of Deline as the cradle of the game is overblown and misleading.

Among the targets of their criticism is a tourism website sponsored by the Northwest Territories government — www.spectacularNWT.com — that calls Deline the sport’s birthplace.

“We are well aware the intention by Deline is to boost their tourism, but at the same time someone has to draw the line against obvious errors in the claim,” say the Swedish researchers, Carl Giden and Patrick Houda, who have urged fellow members of the Society for International Hockey Research to issue a clear statement challenging Deline’s claims.

Fitsell, an SIHR founder and author of the 2006 book How Hockey Happened, says the Canadian-based group has wavered between ignoring Deline’s “flimsy” claim and making an official statement similar to one issued several years ago to dispute a “birthplace” boast by the Nova Scotia town of Windsor.

“The obvious challenge against the claim of Deline is that the game of hockey played by Franklin and his friends was a single isolated event — it did not contribute to the evolution of hockey at all — and the area did not have any further local activities for over a century,” Giden and Houda state. “One can produce the most spectacular claims by picking such a single event out of its greater context and use Deline’s way of argumentation.”

When Franklin and the members of an overland expedition wintered at Fort Franklin in 1825, the Royal Navy commander wrote in a letter to Britain that his men were playing games of “hockey on the ice” to keep their spirits up. And in a separate reference in his diaries, Franklin noted that “skating” was among the winter “amusements” enjoyed by his men.

Whether Franklin’s men were playing their rudimentary form of hockey at the same time that they wearing skates remains unknown. But if they were, their games would be among the earliest documented examples of a stick-and-ball contest being played on ice and with skates, and would represent the first known use of the word “hockey” in direct association with the skating sport that would become Canada’s national winter pastime.

The experts, however, say Deline’s “birthplace” claim is a clear overstatement, and they fear that a more nuanced, scholarly and accurate understanding of hockey’s diverse roots will be undermined by yet another populist claim based on a single, isolated piece of evidence — the same way Windsor, N.S., mounted its controversial birthplace claim in the 1990s based on a fictional reference to boys playing “hurly” on a frozen pond in that province in the early 1800s.

At the time of William and Kate’s visit to the Northwest Territories — the official media guide for which highlighted Deline’s birthplace claim — area officials played up the 1825 Franklin references as ironclad proof that hockey was invented there.

Norman Yakeleya, the area’s representative in the territorial legislature, told reporters bluntly: “Deline is the rightful birthplace of ice hockey in Canada.”

An official heritage designation recently granted by the Northwest Territories government is more measured in its description of the Franklin ice games, calling Deline “a significant location in the history of the development of hockey in Canada and in the circumpolar world.”

It’s increasingly well known — thanks to significant discoveries by Giden, Houda and other hockey history researchers in recent years — that a variety of stick-and-ball field games were being adapted to ice in late 18th- and early 19th-century North America and Europe.

While Englishmen such as Franklin called these ice games “hockey-on-the-ice,” virtually the same sport was being called hurly or shinty or bandy depending on where and when it was being played.

And the 1825 games played in present-day Deline were not, historians have shown, the first of their kind in the century or so before modern hockey crystallized as an organized, indoor sport in Montreal in 1875.

As far as the SIHR and the International Ice Hockey Federation are concerned, a game played in Montreal in March of that year represents the true beginnings of the modern sport of hockey.

A detailed report on the game, printed the next day in the Montreal Gazette, described the rules governing the match in a way that clearly distinguished it from more informal ice games documented earlier in Canadian and world history.