Nunavut, Greenland should enjoy “the kind of benefits that the rest of the world gets” 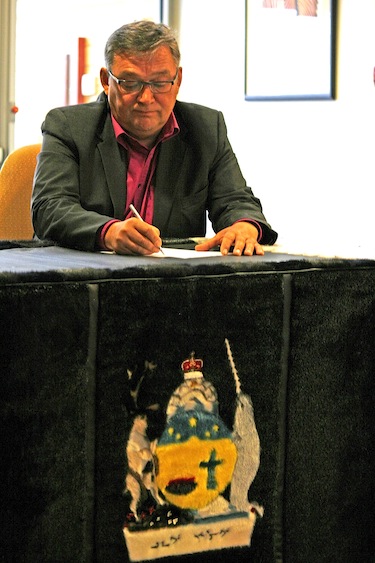 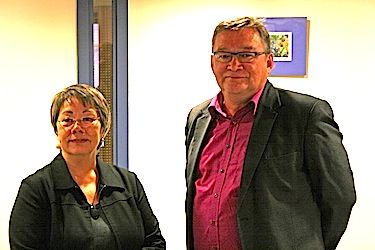 Nunavut Premier Eva Aariak and Greenland Premier Kuupik Kleist pose together Aug. 9 in the Nunavut legislative building where they spoke to reporters. (PHOTO BY DAVID MURPHY)

Greenland Premier Kuupik Kleist dropped by Nunavut for three days this past week to talk to Premier Eva Aariak about resource development.

And they agreed Nunavut and Greenland should “take our relationship a step forward” on a number of development issues, Kleist told reporters Aug. 9 at a press conference inside the Nunavut Legislative Assembly.

The main talking point between the two Arctic leaders: the development of natural resources like oil and gas exploration, and mining.

“The situation with Nunavut and Greenland is very similar,” Kleist told Nunatsiaq News. “There’s a lot of exploration going on, but very few projects taken into excavation or utilization yet. We are both expecting and hoping that some of the exploratory activities will be carried into actually excavating minerals and utilizing natural resources.”

Now that ice is melting off the island of Greenland at unprecedented rates, and around surrounding waters, it’s allowing for more exploration in mining, oil and gas extraction.

But Aariak said Nunavut lags behind Greenland in the pace of resource development.

“Greenland is more advanced in that area. This is one of those very things we talked about — about sharing ideas, sharing best practices, and learning from one another,” Aariak said.

This type of development could help Nunavut progress “into a new frontier in today’s society,” so Nunavut and Greenland could “be enjoying the kind of benefits that the rest of the world gets.”“Infrastructure equals economic development. Economic development equals jobs. Jobs equals food on the table — and that translates to healthy communities through education and healthier individuals,” Aariak said.

Devolution might change that in the future, and could help further development projects like offshore oil extraction, she said.

Devolution of control over lands, waters and resources is essential to the ongoing development of Greenland and Nunavut, emphasized an Aug. 9 news release from Greenland and Government of Nunavut.

Kleist and Aariak said there’s opposition to development from environmental groups, but their governments remain conscious about the safety risks involved in offshore drilling.

However, pressure from groups opposed to oil and gas exploration has been persistent, with Greenpeace activists climbing Cairn Energy’s drilling rigs in protest.

And recently, Greenpeace also started the “Save The Arctic” campaign to create an off-limits “Arctic Sanctuary.”

“Greenpeace is more interested in making actions, which are more spectacular. It also seems Greenland is a perfect scene for promoting themselves,” said Kleist.

Kleist said he’s more than willing to sit down with Greenpeace to talk about environmental issues, as he says he does with other groups such as the World Wildlife Federation, which now has an office in Iqaluit.

Kleist maintains Greenland has strict regulations in place to avoid a potential spill. And an agreement on cooperation on marine, oil, pollution, preparedness and response in the Arctic is being negotiated through the Arctic Council.

“There’s no question that Greenland and the Arctic people need to explore new areas of economic activities to be more self sufficient. But also evident that any kind of human activity poses a risk to the environment,” Kleist said. “I don’t claim that there is no risk. But we are trying our best to protect the environment.”

As for economic ties with Nunavut and Greenland, these have the potential to be stronger because of Air Greenland’s new route from Iqaluit to Greenland’s capital, Nuuk, said Kleist.

Kleist has pushed for more development in Greenland ever since he took power in 2009.

Kleist said he thinks Greenland is on track to become independent from Denmark in his lifetime.

“I’m not able to set any date, but I think what development shows and tells me, the Greenland people themselves will eventually raise their voices to be independent themselves one day,” Kleist said.