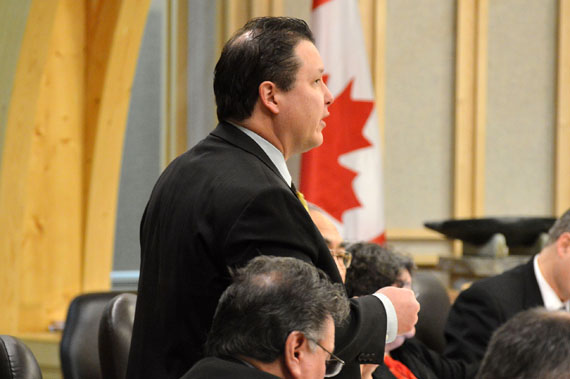 Nunavut Health Minister George Hickes said language services at the Qikiqtani General Hospital are improving, but his department still has work to do on the issue. (PHOTO BY STEVE DUCHARME)

Nunavut’s health minister, George Hickes, says his department is making progress in responding to complaints of poor language services at the Qikiqtani General Hospital, brought to light last year in a critical report by the Office of the Nunavut Languages Commissioner.

But there is still much to do, Hickes said.

“Are we satisfied where we are now? No,” Hickes said in response to questions Feb. 24 from Iqaluit-Niaqunnguu MLA Pat Angnakak in Nunavut’s legislature.

“There are gaps, I recognize that and its something I deal with on a continual basis.”

Nunavut’s Office of the Language Commissioner, in a report tabled in May 2016, discovered that Nunavut’s largest hospital effectively had no language policy, as revealed in an investigation covering the period from March 2012 to March 2013.

Most hospital services were only available in English, the report found, resulting in severe problems for non-English, unilingual Inuktitut speakers in communicating and receiving treatment at the hospital.

“There is often a lack of Inuktitut interpretation at the hospital, especially for in-patients who have to stay there for an extended period of time,” Angnakak said, asking if Hickes could provide the chamber with exact numbers for translators working at the hospital.

Hickes replied that the number in interpreters available at QGH fluctuates, saying that often “we have to rely on casual workers.”

“It’s a continual challenge to make sure the staff we have are familiar with terminology so that they can express in a clear and concise manner to our patients to make sure that they are aware and understand the circumstances,” he said.

“One of the challenges that we have, providing French services, it can be a more infrequent request than Inuktitut services,” he said.

“We do rely on existing staff to provide and supplement the translation services for French,” Hickes said, adding the health department is in the process of hiring a French speaker for its Office of Patient Relations.

Nunavut MLAs created the office in 2013 in an effort to address longstanding, often-ignored grievances from patients and families of patients.

Hickes credited the office for reducing the number of complaints and identifying key areas of concern for his department.

“I can say with all confidence that the conditions are more open and more conducive to positive relationships with our patients,” he said.

“Personally I don’t get as many complaints as I’m sure former ministers may have had.”

While complaints might indeed be ebbing, health care in Nunavut and its sensitivity to non-English culture was highlighted again recently after a coroner’s report—released in February—concluded that language barriers were a contributing factor in the death of Annie Kootoo in 2015.

Hickes described Kootoo’s death as “heartbreaking,” Feb. 22 in response to questions in committee of the whole from Iqaluit-Sinaa MLA Paul Okalik.

“Just for the sake of the public and for all members here, we don’t wait to react to reports such as this,” Hickes said, referring to the coroner’s report.