“You cannot make up the rules as you go along” Workers at TBG Construction Ltd. plan to put the finishing touches on this little house, as a toilet-equipped “job shack” for its workers who want to warm up or take a break. But it won’t be used until next year after the company decided to postpone work on its housing projects, although you can see the piles were already in place. (PHOTO BY JANE GEORGE) Here’s how the Canadian High Arctic Research Station, the game-changer in Cambridge Bay, looks. Thanks to CHARS and population growth in this hub, over the next 20 years, Cambridge Bay’s population is expected to grow by 46 per cent, to reach about 2,500 residents by 2035. Housing everyone will mean the addition of 270 dwellings to the existing stock of 501 private dwellings, according to the town’s development plan, adopted by the hamlet and now in the hands of the minister of Community and Government Services. (PHOTO BY JANE GEORGE) 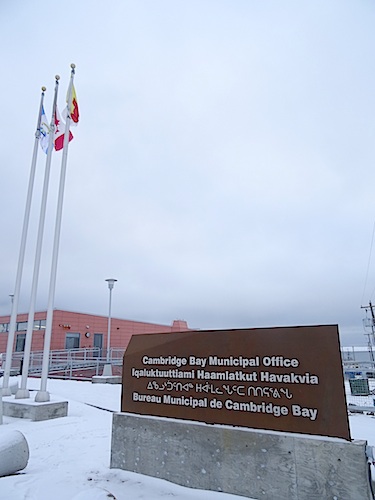 The $11-million Cambridge Bay hamlet office has been open for two years. A major project, it’s still dwarfed by the $200-million-plus Canadian High Arctic Research Station which is supposed to officially open next month. (PHOTO BY JANE GEORGE)

CAMBRIDGE BAY—A messy municipal conflict has prompted a developer to postpone a big housing construction project in this western Nunavut hub of about 1,700 people until next year.

The conflict, which featured one hamlet councillor shouting insults and the resignation and subsequent return of the hamlet’s senior administrative office, proves at least one thing: there’s unease over the building boom underway in Cambridge Bay that’s been fuelled by the imminent opening of the Canadian High Arctic Research Station.

In 2016, 52 new housing units went up. And this year TBG Construction Ltd. planned to build about 20 more units of varying sizes, in duplexes, a 14-plex and a single family unit with a nanny apartment.

That would have followed up work done by the company in 2016, with Nunavut Excavating Inc., a duplex and an eight-plex in Cambridge Bay on lease to the Canadian High Arctic Research Station, known as CHARS, which has since decided it wants incoming employees to either build or rent their own housing.

But, for this year’s work, TBG needed to get lot leases for the land and development permits to move ahead with sealift orders for construction materials and hiring.

That’s when the trouble started at the hamlet council.

“We were being nice and this was for CHARS and we got through it. This year it’s a little different [for TBG] because they are obviously not going to be building these places for the good of their health,” said Wilf Wilcox, owner of Jago Services Inc., an electrical, heating and plumbing contractor, who also sits on the hamlet’s lands committee.

That quotation was pulled from the transcript of the July 5 special council chambers meeting on TBG, which you can read on the Cambridge Bay municipal website or in the Scribd document below.

TBG had eyed a September construction start-up, but the company received approval of its development permits from the hamlet only on Oct. 10—and, on Oct. 11, the company pulled the plug on the work until 2018.

TBG had already missed the last sealift order deadline, but then the company learned that many of those expected to work on this year’s project had found other jobs.

TBG and Nunavut Excavation didn’t respond to requests for comment.

But, between June and September, TBG repeatedly tried to get its lands and development paperwork in order—moves that sparked the July 5 hamlet council meeting.

According to minutes from the Hamlet of Cambridge Bay, Wilcox had, in a previous meeting, asked for more information on TBG suggesting, among other things, that the company planned to lodge its workers in sea cans—an allegation he later called “a red herring.”

On July 5, Wilcox also wanted to know if the hamlet had made various “promises” to TBG, a comment that SAO Marla Limousin said constituted an “accusation of wrongful behaviour of administration.” That, and other statements from the July 5 meeting, prompted her to tender her resignation, although she later returned to her job.

The lands committee had asked as well if the council could “deny applications and stop development coming into the community.”

No, Limousin said July 5, based on information from the Government of Nunavut, but you could set priorities and put some stipulations into bylaws to regulate development, she said.

The special meeting also heard from Coun. Jamie Taipana, fuel manager with Kitnuna Petroleum Ltd., who chairs the lands committee. He alleged that TBG was “dodgy” and had tried to “force our feet to the fire” in the timing of its application shortly before the sealift deadline.

He wanted to know how TBG had spent money in town and whether the company was a “good corporate citizen.”

Wilcox also suggested that TBG was speculating on CHARS and that “they will rent [their units] to corporations or to lease back.”

“We can add conditions with respect to how the structure gets built. We cannot add anything about corporate citizenship or the amount of money someone puts into a community,” Mayor Jeannie Ehaloak said at that point in the July 5 meeting.

Ehaloak, who is a candidate for MLA in the Oct. 30 territorial election, and Limousin explained that to make a zoning bylaw change, to add requirements or take away requirements, an amendment to the zoning bylaw is required.

“You cannot make up the rules as you go along,” Limousin said.

Coun. Andrea Omilgoitok suggested near the end of the July 5 meeting that the current bylaw could be reviewed “at another time.”

“YOU JUST GOT BULLSHITTED AND YOU ARE SUPPORTING IT,” Wilcox then “shouted,” according to a verbatim transcript of the July 5 meeting.

Wilcox told Nunatsiaq News Oct. 13 that he was tired July 5, had suffered from long-term neck pain and headaches, and was ready to leave that week on holiday.

Wilcox said he still feels the hamlet is on the side of developers.

Government contracts include best-practice stipulations in their tenders, and that is something he would like to see put into non-government projects as well.

CHARS is a game-changer, Wilcox said, but the hamlet needs to adopt good practices with respect to new development.

“It’s terrible to kind of lose control in our own council chambers,” he said. “Our community has always worked hard and it’s our community—not the administrator’s.”

But not all in town agree with Wilcox, whose current term as councillor expires with municipal elections in December.

Peter Laube, who owns a Cambridge Bay construction company, Kalvik Enterprises, which works with CHARS as well as with TBG, says local builders don’t have the capacity to do the big-ticket housing projects needed for CHARS and its roughly 55 new employees.

But they can still benefit by collaborating with outside developers.

“We knew when CHARS was coming that it was going to open the door to development to big companies and would develop the hell out of the community,” Laube said, speaking Oct. 13 in his workshop.

“If you throw barriers in the way, it’s going to reflect on the community.”