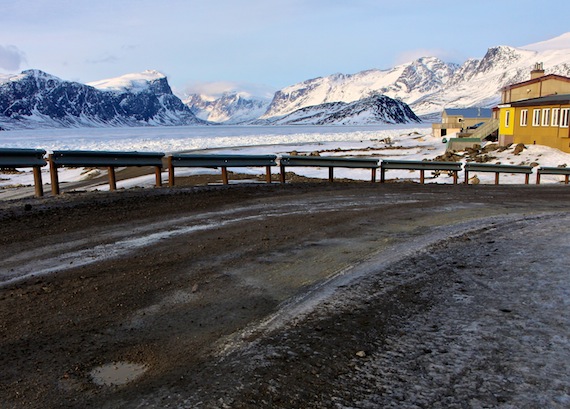 In Pangnirtung, seen here this March 18, the high temperature reached 6.5 C, many degrees above the normal temperature for that day. (FILE PHOTO)

Last year joined the 10 previous years as one of the warmest on record — at ninth place, said the World Meteorological Organization’s May 2 “Statement on the Status of the Global Climate.”

“The sustained warming of the lower atmosphere is a worrisome sign,” said WMO Secretary-General Michel Jarraud in a news release from the United Nations’ weather agency.

That makes 2012 the ninth warmest year since records began in 1850 and the 27th consecutive year that the global land and ocean temperatures have stood above the 1961 to 1990 average, according to the WHO statement.

“The record loss of Arctic sea ice in August-September — 18 per cent less than the previous record low of 2007 of 4.17 million square kilometres— was also a disturbing sign of climate change,” Jarraud said.

“The year 2012 saw many other extremes as well, such as droughts and tropical cyclones. Natural climate variability has always resulted in such extremes, but the physical characteristics of extreme weather and climate events are being increasingly shaped by climate change,” he added.

WMO’s annual statements gather the key climate events of each year. The 2012 climate assessment, the WMO’s most detailed to date, will guide discussion at its executive council meeting later this month.

Among the other signs of climate change mentioned in the WMO statement: above-average temperatures throughout 2012 across most of the world’s land surface areas, with global precipitation slightly above the 1961 to 1990 long-term average.

However, snow cover extent in North America during the 2011-2012 winter was below average, resulting in the fourth smallest winter snow cover extent on record, according to data from the Global Snow Laboratory, cited by the WMO.

The Arctic summer of 2012 witnessed “even more dramatic changes,” the WMO said.

These included a record low northern hemisphere snow extent in June, a record low sea-ice extent in September, record high permafrost temperatures in northernmost Alaska, and the longest duration of melting on the Greenland ice sheet ever observed in modern times, with a rare, nearly sheet-wide surface melt in July.

In early July, Greenland’s surface ice cover melted dramatically, the WMO said, with an estimated 97 per cent of the ice sheet surface having thawed by mid-July.

This was the largest melt extent since satellite records began 34 years ago.

As for overall conditions, they’re likely to get hotter and more volatile, as illustrated by the diagram, shown below, from the WMO.

This shows how higher average temperatures increase the chance of even hot weather.

Because warm air can hold more water vapour, which is a climate-warming greenhouse gas, there is a greater chance of extreme events and floods, the WMO said.

This diagram from the WMO’s May 2 annual climate statement shows how higher average temperatures increase the chance of even hot weather.