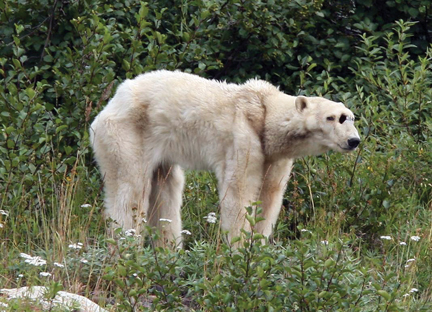 The late photographer Heiko Wittenborn took this photo of a starving polar bear in 2007. The polar bear was an unexpected sight 160 kilometres inland from Ungava Bay in Nunavik , an area usually known as black bear country, and the animal was visibly malnourished, with its fur hanging from its bones. To stave off hunger among polar bears living in an increasingly ice-free Arctic, some polar bear scientists are suggesting feeding hungry polar bears. (FILE PHOTO BY HEIKO WITTENBORN)

Nunavut polar bears might one day make the move away from their preferred diet of seal to store-bought foods such as “commercially-formulated bear chow,” a group of southern scientists said in a recent paper.

That’s one suggestion put forward by Andrew Derocher of the University of Alberta and other polar bear scientists whose paper “Rapid Ecosystem Change and Polar Bear Conservation” was published this week in the journal Conservation Letters.

While feeding polar bears is a “radical” solution, they say, “future conditions may be well outside the range of past circumstances and necessitate very different actions then today.”

And those conditions include an increasingly ice-free polar region.

Inuit may find the idea of feeding polar bears “stupid,” Derocher acknowledged in an interview with Nunatsiaq News, but he said if the predictions for extreme Arctic warming come into play, Inuit will have difficult choices to make.

And making those decisions would be a lot easier now than in a crisis situation, he said.

If feeding polar bears seems crazy, it’s less crazy than some of the other ideas that have been circulated recently, such as plastic ice floes for polar bears to live on in the Arctic, Derocher said, adding that he’d like to see people decide what they want to do before they’re forced into acting.

Less ice would mean that polar bears could face a rapid decline in their survival and ability to reproduce, Derocher and other scientists suggest.

“The first poor years are likely to present a near term critical challenge to polar bear conservation,” they say.

This supplemental feeding would best be done by giving polar bears a kind of man-made bear chow.

But that could cost about $32,000 a day to feed 900 polar bears, or one million dollars a month to feed the most accessible populations, by the scientists’ estimate.

This feeding could be necessary for several months at a time, they say.

Feeding polar bears their preferred diet of seals would be an “unlikely” option, they say — because seals also affected by climate change and “there are ethical questions around killing one marine mammal species to supplement the diet of another.”

The paper’s authors admit that the move to feeding polar bears might not, in the end, help polar bears over the long term.

The feeding could result in “commitment to a semi-managed bear park model” — and it might not even resolve the increasing number human-bear conflicts seen in Nunavut communities.

But Derocher said feeding mammals is nothing new: in Eastern Europe brown bears are fed grain so that their numbers can remain healthy — and locals can hunt them.

Among the other options:

• Diversionary feeding, which would could be used to lure polar bears to new locations with more resources. But that could have some “possible negative consequences” such as conflict between polar bears and other wildlife.

• Moving bears into captivity and then back into their natural habitat. But that raises concerns about disease and parasite transmisson, although some “at risk” bears could be moved and then released, the scientists suggest.

• Permanent relocation. But it could disturb the polar bears’ local behaviours and seasonal cycles and introduce disease. While rescue to zoos could be a way of helping people understand the need to curb climate change, to many, “keeping polar bears in captivity is unacceptable.”

The scientists say that the options, costs and logistical problems of dealing with “catastrophic decline in ice habitat” need coordinated planning with more input from “other stakeholders” (besides that of what they call “northern consumptive users”) in polar bear management.

Those “other stakeholders” could include tourism operators and possibly even environmental organizations, Derocher said, because polar bears are a “global resource” whose future matters to the world where it’s increasingly subjected to scrutiny.

Next month, parties to the Convention on International Trade in Endangered Species of Fauna and Flora meets in Thailand, where they will consider up-listing polar bears.

That CITES up-listing, a move which the United States and Russia already support, would ban international polar bear trade.

But that’s not a move to conserve the polar bear population, Derocher said.

As to how that should be done, feeding is one option. “It’s not a prescription,” he said.