Changes also lie ahead for the U.S.-led Arctic Council 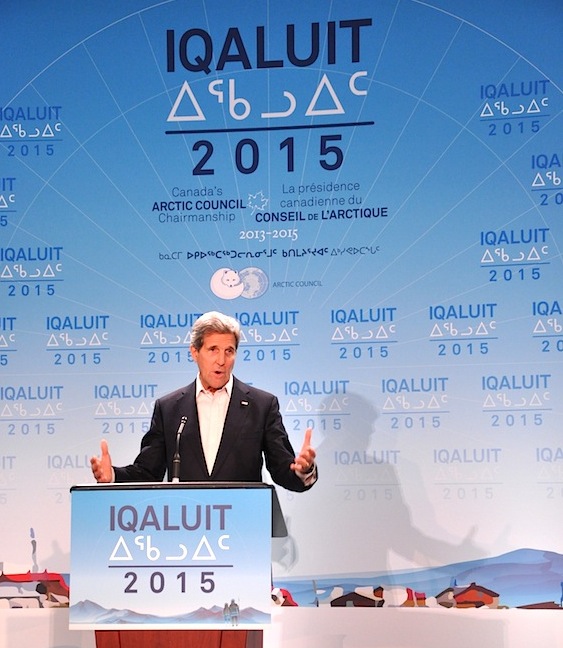 John Kerry, Secretary of State under U.S. President Barrack Obama, presides over a news conference held at the Arctic Council Ministerial meeting in Iqaluit in April 2015. Trump will appoint a new secretary of state who could change the direction of the eight-member body of circumpolar states, now under the leadership of the U.S. until the spring of 2017. (FILE PHOTO)

Under the leadership of Donald Trump, the new president-elect of the United States, the Arctic could get a lot warmer.

Trump, who beat out contender Hillary Clinton in the Nov. 8 election, does not believe in climate change.

He has said on numerous occasions that the world is not warming, although scientists say the Arctic—along with the rest of the world—is getting hotter, with the Arctic heating up twice as fast as other regions.

“Global warming is based on faulty science and manipulated data,” he said on social media.

The concept of global warming was created by and for the Chinese in order to make U.S. manufacturing non-competitive.

In any event, under the Trump administration, Canada’s Arctic residents can expect to see several fundamental changes in Arctic policy.

Last March, Prime Minister Justin Trudeau and U.S. President Barack Obama, who, in 2015, called for “urgent action” aimed at slowing the pace of global warming in the Arctic, said they would make climate change and the long-term health of the Arctic environment and its people a priority as they worked together on implementing their commitments under last December’s Paris Agreement on climate change.

But Trump has vowed to pull the U.S. out of the Paris Agreement which went into force earlier this month.

That intention may take three years to carry out—but, in the meantime, because the agreement is non-binding, there will be no one to enforce compliance from the U.S., which now produces 13 per cent of the world’s greenhouse gas emissions.

The U.S. could also simply withdraw from the UN 1992 climate convention which would only take a year.

Trump has said he would like to scrap the Environment Protection Agency and dump Obama’s Climate Action Plan to focus on “real environmental challenges, not the phony ones we’ve been looking at.”

He also has said he will encourage coal production and Arctic oil drilling offshore and in the Arctic National Wildlife Refuge.

Among the possible names being mentioned for this position: Newt Gingrich, a right-wing former U.S. politician.

And for the post of Interior Secretary, which oversees environmental policies, Trump is said to favour Forrest Lucas, co-founder of oil products company Lucas Oil.

Arctic security is also set for some changes. Trump has said he’d move ahead with the ballistic missile defence system, a plan batted around since the early 2000s, when Inuit in Canada and Greenland reacted to the U.S. plan for anti-ballistic missile radar and communication systems in several places across the Arctic, including the U.S. Air Force base in Thule, Greenland.

The idea was to defend the U.S. against nuclear missile attacks launched from ships or land, as well as lasers fired from modified aircraft from so-called “rogue” states such as North Korea and Iraq.

“Under a Trump Administration, the United States will build a comprehensive ballistic missile defence system with a heavy emphasis on space-based early warning and missile tracking technologies,” Alexander Gray, senior defence advisor to Trump, said in a October memorandum to the Trump Campaign.

For now, in a reaction to Trump’s election, Trudeau said Nov. 9 that “our shared values are strong. Our common purpose is to build countries where everyone has a fair chance to succeed.”

Nunavut’s neighbour, Greenland, said Nov. 9 in a statement from its foreign affairs minister Vittus Qujaukitsoq that Greenland looks forward to working with the next U.S. administration. Greenland has played an “important role for the U.S. in providing access to its land, sea and air territory for defence and scientific purposes,” the statement noted.