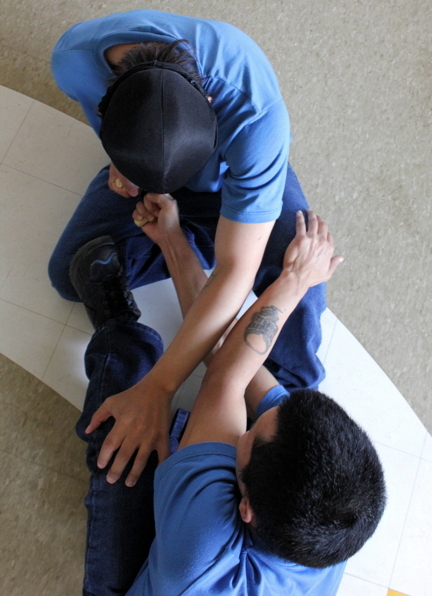 A pair of Inuit inmates battle in the aqsaaraq, or hand-pull, game. “It’s not about winning,” one said. “It’s about building strength.” 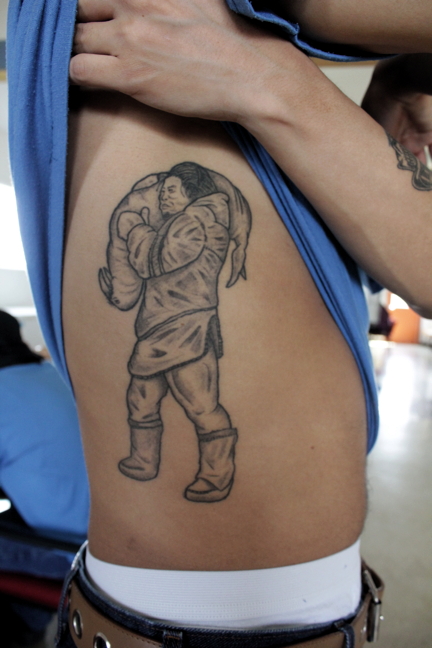 New ink: one inmate shows off a new tattoo he just got at Fenbrook Institution. It is a Tuniq — a giant of Inuit legend — carrying a walrus. 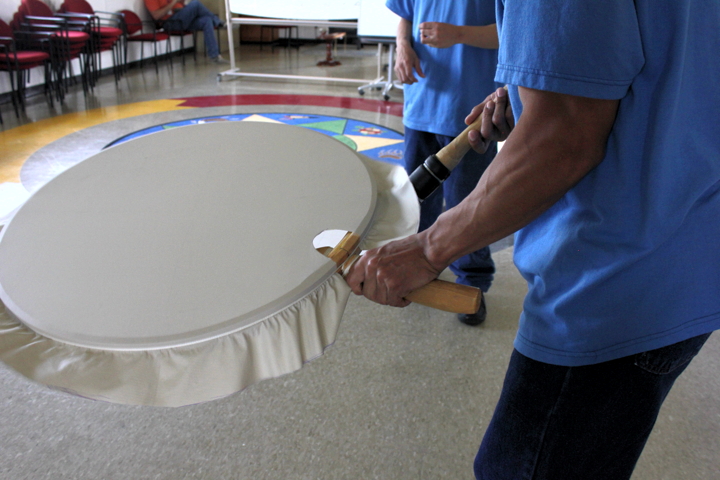 Inmates at the medium-security Warkworth Institution, near Cambellford, Ont., get an elder visit from Piita Irniq most Friday afternoons. They usually take time to dance with the drum that Irniq made for them. (ALL PHOTOS BY LISA GREGOIRE) 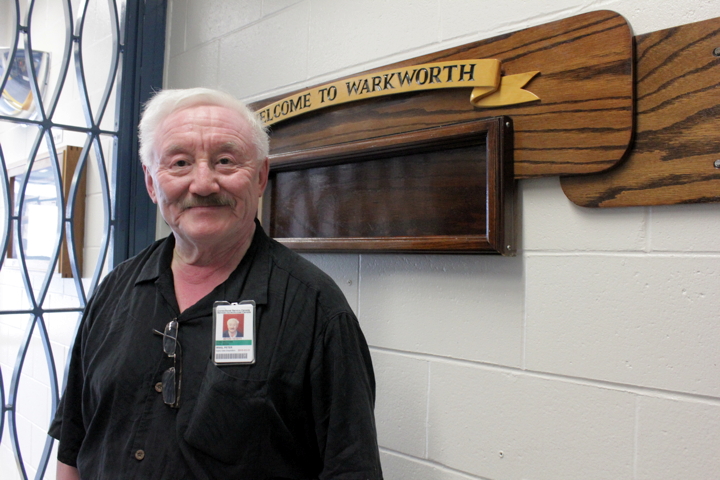 Two of the four men dance with the drum. Two don’t.

Three of them have children. One doesn’t say.

They drink a lot of instant coffee, tell stories in Inuktitut and laugh. Sometimes they just sit quietly.

At least one of them killed a man.

They are all from Nunavut’s Baffin region.

One man has a new tattoo on his right torso, an exquisite rendering of a Tuniq carrying a walrus on his shoulder. (The Tuniit were northern giants of Inuit legend who preceded the Thule people.)

All four of them are northern men, sweating through their clothes on a sticky-hot August afternoon.

And after three hours of what resembles a casual visit to someone’s kitchen, the four inmates, in blue T-shirts and jeans, shuffle back to their six-by-10-foot cells within the chain-linked, barbed-wire enclosure of Warkworth Institution.

“When we are together, we get to be Inuit for a while,” says Piita Irniq, who works for Corrections Canada as an elder visitor. “When I leave, they become prisoners again.”

From Tuesday to Friday every week, for the past six years, Irniq — a former Northwest Territories MLA, civil servant and Nunavut commissioner — logs roughly 2,000 km driving to more than a half dozen Ontario federal prisons to visit Inuit inmates.

He has Johnny Cash’s Folsom Prison Blues CD on the dash along with a number of Inuktitut recordings from Baker Lake and Igloolik.

The institutions he visits range from minimum to maximum security. The maximum-security prisons, such as Millhaven, are more strict.

Sometimes he has to meet inmates individually, in their cells. Sometimes, if the guards don’t recognize him, he’s turned away at the gate.

He walked past Paul Bernardo’s cell at Millhaven a couple of times. “He always said, ‘Hello. How are you?’” Irniq says. “He has a great smile.”

During the day, roughly five dozen guards maintain control of the sprawling facility, but none visit us at the Aboriginal cultural centre during our Aug. 8 visit.

The centre is a community hall for Aboriginal programming, with kitchen and meeting rooms and a tipi and sweat lodge outside on the grass.

There is a poster about iglus on the wall, and one about inuksuit. But otherwise, no sign of Inuit culture. It is mostly decorated with the four colours of the medicine wheel and quotes from First Nations chiefs.

Irniq drives to Warkworth every Friday and stays from 1 p.m. to 4 p.m. He brings fresh bannock, which he bakes in the morning on his barbecue, and whatever country foods he can find. For the most part, he’s the only visitor they get.

The majority of the Inuit inmates here had never been south before incarceration. They have no nearby family — or at least none who can afford to make the trip.

Their English is not so good. They suffer iron-deficiency from a lack of red meat. They seek, but rarely get, counselling. And the limitless, wide-open expanse of home has effectively collapsed into a closet.

One time, an inmate told Irniq that Ottawa should build a federal jail in Nunavut so Inuit offenders can be near home and family. Irniq replied, “or, you could just stay out of trouble.”

“They’re very sad, some of them. Very remorseful,” he says during our three-hour drive to the jail. “The system has punished them. My role is not to re-punish them. My role, as an elder, is to make them good citizens and stay away from booze and drugs.”

Most of the men he visits committed crimes when they were drunk or high. He knows addiction is usually a symptom of something else, but he tells the men repeatedly: control the addiction and you have a better chance of controlling yourself and embracing your culture.

Irniq quit drinking alcohol in 1995. He hasn’t touched it since, not even during state-sponsored trips to Russia — and that’s hard.

He was born in 1947 at Lyon Inlet, near Naujaat, to what he calls “adventurous parents” who travelled everywhere by dog team, thousands of kilometres to dozens of communities. Sort of like what Irniq does now, with air-conditioning, and no dogs.

When he was MLA in the first fully elected NWT legislature from 1975-79, Irniq was minister of health and social services, which included territorial corrections.

Irniq pushed for more Inuit guards and managers at territorial institutions and more cultural programming for inmates. He was instrumental in getting the late Simonie Alainga hired as a guard so the hunter could take inmates out on the land.

“I love telling this story: so Simonie Alainga was the guard. He would be in a skidoo looking for caribou and the inmate would be behind, in a qamutiq, with a rifle,” Irniq says, laughing. “Maybe some people thought it was unusual, but I didn’t. There was never a problem.”

In the past eight years, the number of Aboriginal people incarcerated in Canadian federal prisons has nearly doubled, something Howard Sapers, Canada’s correctional investigator, has called a “disturbing trend.”

Aboriginal prisoners now account for more than one-fifth of Canada’s prison population even though they comprise only 4.3 per cent of people in Canada.

According to Sapers, Aboriginal prisoners stay behind bars longer, have higher security levels and injure themselves more frequently.

In a report Sapers tabled to Parliament in November 2013, he slammed the federal justice department for not addressing the concerns he raised in Spirit Matters, a special report he had tabled eight months prior.

“I expected a meaningful and comprehensive response, consistent with the extraordinary measures that were taken to have Spirit Matters laid before Parliament. In the end, the Correctional Service’s response was neither,” Sapers wrote.

According to Statistics Canada, 417 Nunavut residents sentenced for a crime entered territorial or federal institutions from 2011 to 2012. All of them identified as aboriginal.

Some of the inmates here at Warkworth play floor hockey. One brags he’s the jail’s star player.

Some work for CORCAN, a Corrections Canada rehabilitation, training and employment centre on site where they can do many things such as learn plumbing, make clothing, manufacture furniture or work in the laundry service. One Inuk inmate makes leather mittens and moccasins.

One is going to school to pass Grade 9. He struggles with science.

One desperately wants counselling, over the phone, in Inuktitut. He’s been trying for months.

One says they organized an “Inuit information day” for Warkworth staff a while back. Only one employee showed up.

And they all miss the land.

“Ever since I could carry a rifle, I’ve been hunting. When I was 11,12 years old, I got my first caribou. That feeling is hard to forget,” says one man, who is 30. “When you see a caribou, or taste caribou, you get that feeling back.”

One man is attending a violence prevention program. “When I’m very angry, I just try to do other things.”

The Inuit inmates at Warkworth get weekly visits from Irniq, visits that usually involve singing and drum-dancing.

They cherish that time.

“It’s so good when our elder comes. We get guidance. It would be nice to have more one-on-one contact with him, but there’s a lack of time. The need is great so we have to share him,” says one man, a scar cutting across the bridge of his nose.

“If one person is having a hard time, he’s the one who gets more attention. As much as I’d like to talk to him, it’s sometimes more important for someone else to.”

The last hour of our visit centres on the drum which Irniq made and gave to the men a while ago.

Irniq shows them how to improve the drum’s tone by tightening the string around the wooden hoop to make the fabric “skin” more taut.

They untie the string, tie one end to a door handle and the other to the drum handle. Irniq pulls the drum so the string is stretched tight before they slowly coil the string back around the drum.

The keeper of the drum — the one in for manslaughter — performs two dances: a raven hop and a polar bear. We all stop to marvel at the performance. When he is done, he grins wildly then grabs paper towel to wipe the sweat from his face and under his shirt.

Smiles drain away and the air leaves the room. The men rinse out their mugs, gather trash and wipe the table clean. Three men leave without saying goodbye. The drum keeper stays behind to walk Irniq to the entrance. They embrace and part ways.

“When I arrive, there’s so much happiness but when I leave, I know they are sad,” Irniq says on the drive home. “Some people have this attitude of, well, they’re criminals. But to me they are human beings who have done something wrong and they are being punished. They are being corrected.

“I try to give them another identify. A cultural identity.” 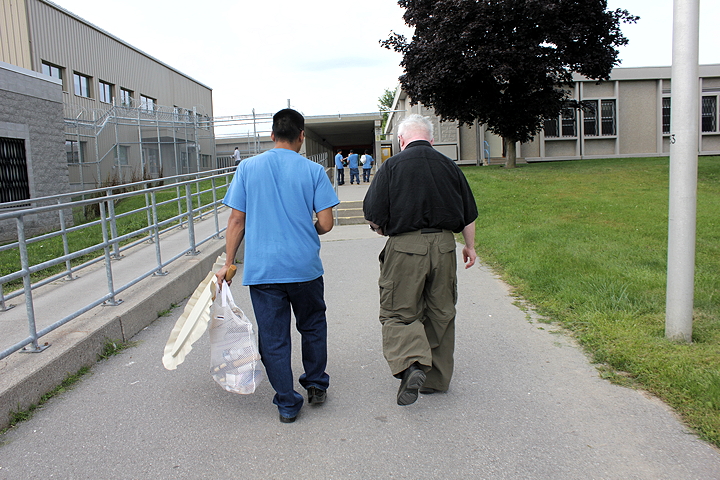 The drum keeper walks Irniq to the entrance to say goodbye. The other three Inuit inmates walk ahead, in the distance