Eager to learn about underground mining — the KIA wants you 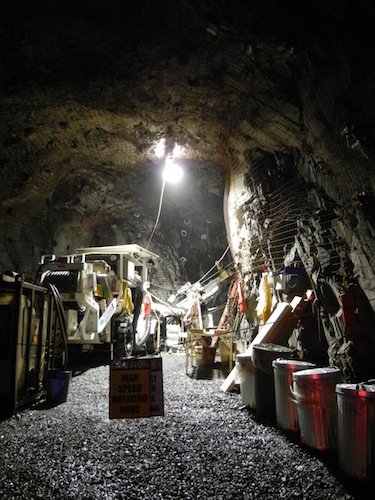 Underground mining activity at Hope Bay, seen here in October 2011, has stopped, but other mines are in the works for the Kitikmeot region — and the courses in underground mining, planned for early 2013 in Cambridge Bay and Kugluktuk, will prepare people for jobs, the Kitikmeot Inuit Association says. (FILE PHOTO)

If you’re over 18, live in Nunavut’s Kitikmeot region, and are interested in a mining job, here’s a new opportunity: a six-week course on underground mining to be offered this coming January in Kugluktuk and Cambridge Bay.

The course, an approved Aurora College program, will be taught by instructors hired by the Northwest Territories Mine Training Society.

During the course, participants will spend the first two weeks on general job preparation skills.

Then, they’ll take five mini-courses — on the life cycle of a mine, mine geology, underground mining, mining methods, and mine safety: in short, everything they need to know more about before taking on an entry level job at a mine or signing up for more job training.

To sign up for underground mining course, which starts Jan. 7 and wraps up Feb. 15, you’ll need to submit a cover letter, resumé, academic transcripts and two letters of reference to {encode=”kiaemployment@qiniq.com” title=”KIA”}. You’ll also have to be willing to have your reading and math skills assessed, because you’ll need to have a Grade 9 level in reading, writing and mathematics.

The course, offered jointly by the KIA, the NWT Mine Training Society, Nunavut Arctic College and the federal Aboriginal Skills and Employment Strategy, provides no housing or stipend for participants.

But it’s all worth the effort: Michele Buchan, manager of Inuit employment and training at the Kitikmeot Inuit Association in Cambridge Bay, says mines in the NWT look for new hires who have successfully passed such a course.

“It’s building a solid base for employability, and we know that the mines in the NWT do prefer to hire people who have had this training,” Buchan said.

Since Newmont Mining Corp. decided to put its Hope Bay mine into “care and maintenance” last February, there’s no underground mining taking place now in the region either.

But, while there’s no operating mine in the Kitikmeot region at the moment, “we don’t want to sit around and wait. We want to get people trained and excitied about the possibilities in front of them,” Buchan said.

“Hope Bay has come and gone and we don’t want to dwell on it,” added Helen Larocque, the KIA’s director of beneficary services.

The goal now is to prepare a work force in the Kitikmeot that will be employable when other mining companies, now at the exploration stage, move into mining, she said.

And there are mines now entering in the environmental assessment and regulatory review process, such as Minerals and Metals Group’s huge Izok Corridor, which recently submitted its project proposal to the Nunavut Impact Review Board and other authorizing agencies.

During the two-year construction period for MMG’s zinc and copper mine, 1,140 people would find work, and then 710 would have jobs at its underground and open pit mines during the mines’ 12-year lifespan, working on fly-in, fly-out rotations.