Early closure of Meadowbank could be “devastating:” Hamlet of Baker Lake

“The closing of the mine will have a massive impact” 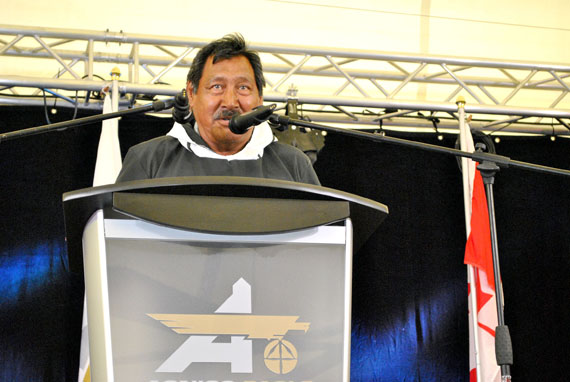 Baker Lake Mayor David Aksawnee at opening celebrations for the Meadowbank mine held June 18, 2010. He said in a statement this month that the early closure of the mine in 2017 will have a “massive impact” on the community. (FILE PHOTO)

The Hamlet of Baker Lake, in a resolution passed May 31 and sent to news organizations June 15, said the earlier-than-expected closure of the Meadowbank gold mine is a “shock” that requires a comprehensive plan of action.

The resolution said the move will “have a devastating effect on the community both socially and economically as the community goes to 80 per cent unemployment.”

To avoid that, the hamlet said the community needs a plan of action before the mine closes in 2017.

“The closing of the mine will have such a massive impact here that without job retraining of workers, business training and development and plan for future economic growth the community will collapse both economically and socially,” Baker Lake Mayor David Aksawnee said in a written statement.

Agnico-Eagle, the owner of the Meadowbank mine, announced this past February that they will close the operation three years earlier than they first planned, in 2017.

That’s partly because mine’s production costs, rising up to $1,040 per ounce of gold, turned out to be much higher than anticipated.

Because of that, and other problems, the company reported a loss of $601.4 million in the fourth quarter of 2011.

But Agnico-Eagle said it remains committed to the proposed Meliadine gold mine near Rankin Inlet, which they hope to put into production in 2017.