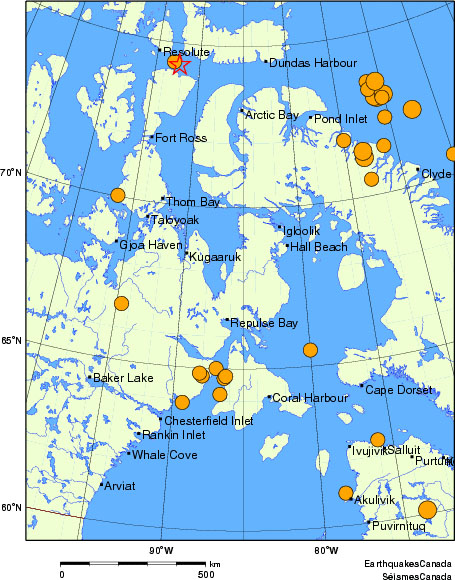 This map shows the location of earthquakes in the Eastern Arctic with a magnitude of 5.0 or greater. (EARTHQUAKES CANADA) 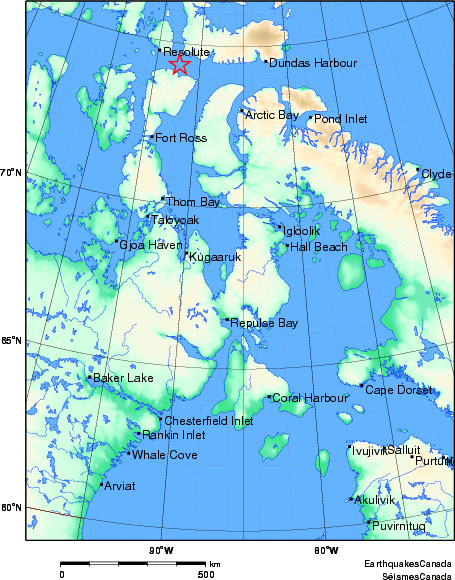 This map from Natural Resources Canada shows the approximate location of the Jan. 8 earthquake that hit the High Arctic. (EARTHQUAKES CANADA)

People in Grise Fiord, Resolute Bay and Arctic Bay felt the impact of a moderate earthquake that occurred at 5:47 p.m. central time Jan. 8, centred at a spot about 93 kilometres east-southeast of Resolute Bay.

Earthquakes Canada said the seismic event was of a magnitude of 5.8—or “moderate”— on the Richter scale, which is used to measure the severity of earthquakes. A 5.8 earthquake can cause damage to poorly constructed buildings.

The Earthquakes Canada agency, a unit within Natural Resources Canada, later revised its 5.9 magnitude estimate to 5.8.

On Jan. 9, a second earthquake was reported to have hit the same region at about noon central time, Natural Resources Canada’s website noted. This time around, the magnitude was slightly less, at 5.1 on the Richter scale.

There have been no reports of injuries, although Facebook postings said houses moved and that a window had been broken.

And, if you felt the ground move, you can fill out a “felt report form” for Natural Resources Canada here.

According to data gathered by the Geological Survey of Canada, the northeast coast of Baffin Island and the High Arctic islands have a particularly high incidence of earthquakes.

In the polar regions, scientists have noted that earthquakes are on the rise, and that some of these may be associated with global warming.

That’s because the pressure of glaciers suppresses earthquakes, so when this ice melts, the pressure release can trigger earthquakes in a movement known as post-glacial rebound.

Over the past 80 years, about 2,000 earthquakes have been recorded in Nunavut.

Most are of these have been minor, falling below a magnitude of 4.0 on the Richter scale.

But on Nov. 20, 1933, a monster earthquake ripped through the sea-floor of Baffin Bay, not far offshore from Pond Inlet. Seismologists believe its magnitude measured 7.3 on the Richter scale. A quake that powerful can hurl people to the ground, shake buildings apart, set off landslides and trigger giant tidal waves.

In 1989, on Nunavik’s Ungava peninsula, an earthquake of 6.3 magnitude tore open the tundra and shook up surrounding communities. The earthquake shattered stone, partially drained one lake, and created a new lake where none had existed before.

You can see if the ground is moving in Nunavut, by checking out a link on the Natural Resources Canada website.