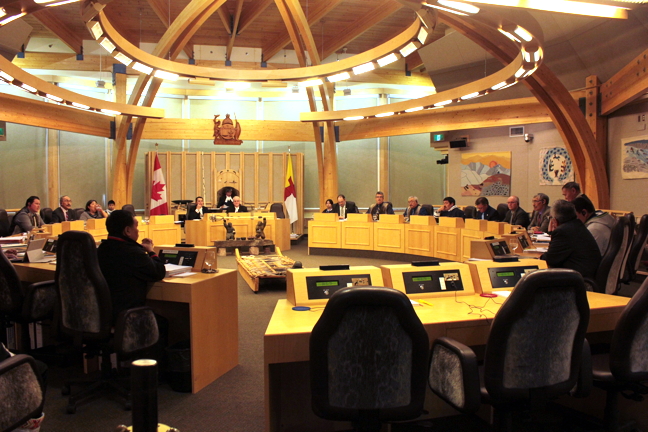 The short, two-week spring sitting of the Nunavut Legislative Assembly will include a number of debates including over whether to enact the long-awaited, much consulted Bill 37, An Act to Amend the Education Act and the Inuit Language Protection Act, or whether to scrap it and start over, as regular MLAs are suggesting. (FILE PHOTO)

If you want to find out what the Government of Nunavut will do, or not do, about its education system, tune in next week for an update.

Bill 37, an Act to Amend the Education Act and the Inuit Language Protection Act, will be up for discussion during the two-week spring sitting of the Nunavut legislature, which starts Tuesday, May 30 (not May 29 as misstated previously.)

The Department of Education will receive more feedback on its proposed amendment when the standing committee on legislation tables responses received from the public on Bill 37, legislative assembly clerk John Quirke told Nunatsiaq News May 25.

This is the first time MLAs will get together following the May 5 recommendation by the standing committee that the bill not proceed due to low consensus on traditional language of education, employment of Inuit teachers and the role of District Education Authorities.

The inner workings of the Department of Health will also come up for discussion in the legislature, Quirke said.

“The Standing Committee on Public Accounts, Independent Officers and Other Entities will table two reports based on the May meetings with the Auditor General of Canada and the Information and Privacy Commissioner,” said Quirke, in a May 25 email to Nunatsiaq News.

A March 7 report by the Auditor General of Canada provided a bleak review of Nunavut’s health department in terms of staffing, training, safety and general capacity for providing basic services needed in Nunavut.

At the time, MLAs were thorough in their grilling of the GN.

Tununiq MLA Joe Enook also told Nunatsiaq News May 25 that the standing committee will provide a response on the commissioner’s findings at the Qikiqtani General Hospital in Iqaluit.

Enook said otherwise the two-week sitting “won’t be anything out of the ordinary.”

“We’re going towards the end of the life of this government. With that, I’m sure the government is going to have issues they want to get resolved,” Enook said, referring to the upcoming October 30 territorial election.

Bills expected to receive a third reading, meaning they will be reviewed in final form before becoming law, include:

• Bill 25, An Act to Amend the Consumer Protection Act;

On the first day of the sitting, Nunavut MLAs will also receive returns to written questions they submitted to ministers in the previous session.

These will touch on questions such as annual fuel purchases by the Government of Nunavut, fuel distribution service contracts and the status of government decentralization.

Quirke said the review of Bill 40, the Corrections Act, will likely take place during the September sitting.

You can watch what’s going on inside the assembly on local televised cable and on direct-to-home satellite services on Bell channel 513 and Shaw channel 289 or 489.