Education — the greatest social policy challenge of our time 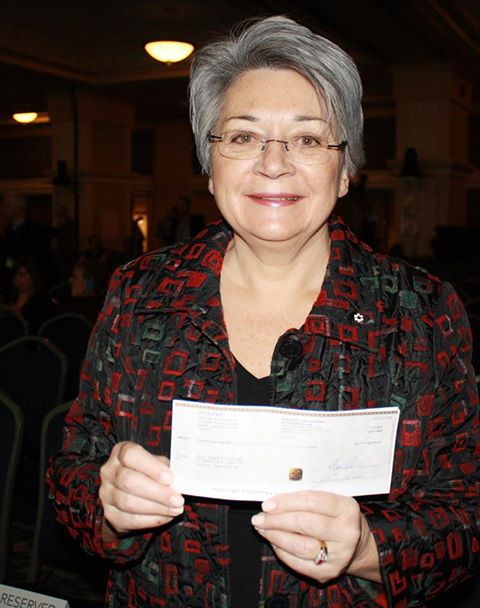 Mary Simon, chair of ITK’s National Committee on Education, with the $325,000 cheque the organization received Dec. 11 as part of ArticNet’s Arctic Inspiration Prize. ITK will use the money to promote parental involvement in schools throughout the four Inuit regions of the Canadian Arctic. (PHOTO COURTESY OF ITK)

Last week Inuit were in the national spotlight at the presentation of the second annual Arctic Inspiration Prize in Halifax. The $1-million prize is made possible through the generous donation of its founders — Arnold Witzig and Sima Sharifi.

I had the honour of receiving, on behalf of the National Committee on Inuit Education, a prize of $325,000 for implementing one of the key recommendations in the 2011 National Strategy on Inuit Education — working with parents to support their children to succeed in school.

The prize money will be used in collaboration with our regional partners on the national committee.

When we were developing the national strategy we heard from teachers and students in communities across Inuit Nunangat that poor attendance was a major factor affecting student success, and that leadership was needed to raise awareness about getting our children to school every day, all day, well-rested and ready to learn.

I was disappointed that the coverage of the Arctic Inspiration Prize event in the Nunatsiaq News article resulted in such negative public commentary about process, and the role of the Amaujaq Centre and ITK [Inuit Tapiriit Kantami] in education.

It’s as though the stark reality of Inuit graduation rates — rates that are among the lowest in Canada — are less important than launching into negative and self-defeating language.

It has really been only 25 years — barely a generation — that we began to talk openly about the residential school era, the abuse and the effects of its policies to eliminate our language and culture.

Now we are in a period of building and shaping our own education systems, based on our culture and language. When I delivered the Inuit response to the apology in the House of Commons, I said it would take years of hard work to restore what was taken away from us.

Like other major hurdles Inuit have had to overcome in this modern era —such as negotiating all of our land claims agreements over a 30 year period — we will need like-minded supporters, informed policy specialists, proactive educators and committed leaders, to make this happen.

I have met many of these individuals in my travels throughout Inuit Nunangat, who are working tirelessly to build the essential elements of a new era in Inuit education. I have also met many Canadians across the country who ask me how they can support the growth and development of education systems in the North.

What was indeed inspiring to see at last week’s ArcticNet conference was the number of young Inuit involved in, or interested in, pursuing research topics in Inuit education.

They spoke eloquently and openly about their own experiences in school and the aspects of the education system that need examination and improvement.

If my generation’s focus was securing our land claims and constitutional rights, then the question must be asked — what will be this generation’s mountain to climb?

My hope is that our leaders will join forces with the growing number of young, energetic and educated Inuit, to take the bold actions necessary to improve outcomes in our children’s education.