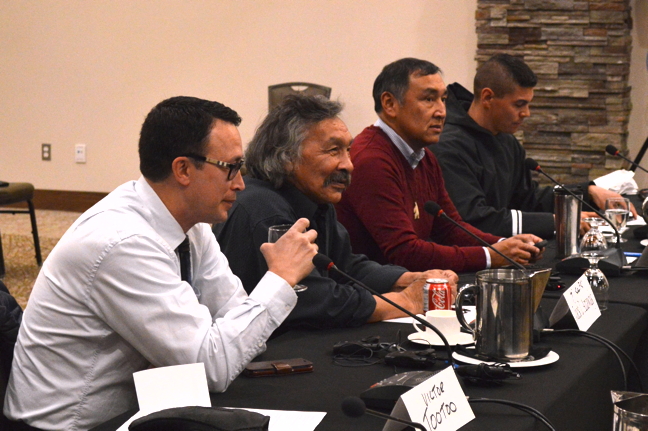 Speakers including former MP and MLA Jack Anawak and Iqaluit-Sinaa MLA Paul Okalik prepare to have their say on how Canada might improve the way we elect federal MPs during an Iqaluit consultation hosted by the Special Committee on Electoral Reform Oct. 17. (PHOTO BY STEVE DUCHARME)

After nearly six months of consultations across the country, Canada’s special committee on electoral reform is recommending a national referendum before any replacement of the current first-past-the-post system with proportional representation.

That decision accompanies a series of 13 recommendations developed by the special all-party committee and presented to the House of Common Nov. 28 in a report entitled “Strengthening Democracy in Canada: Principles, Process and Public Engagement for Electoral Reform.”

“The committee acknowledges that, of those who wanted change, the overwhelming majority of testimony was in favour of proportional representation,” the committee observed in its report.

And, while that may have been true nationally, some Nunavummiut opposed any changes when they appeared before the standing committee last October, fearing Nunavut would lose its voice in Ottawa under a more proportional system.

That may account in part for a further recommendation from the committee for any electoral reform to “enhance the likelihood of improving voter turnout and to increase the possibilities for historically disenfranchised and underrepresented groups to be elected.”

Among those groups listed are women, persons with disabilities, Indigenous peoples, visible minorities, youth and Canadians of lower economic means.

The committee also proposed some form of financial incentive for political parties to run more women candidates and move towards parity in their nominations.

The committee envisions the referendum as a straight up, ‘A’ or ‘B’, choice between the current first-past-the-post system and an alternate electoral system that would be fleshed-out ahead of the referendum campaign—accompanied by appropriate educational material.

Ideally, the committee wants the proposed alternative to achieve a score of five or less in the “Gallagher Index,” an algorithm that measures the differential between total votes received and seats allotted in the legislature.

Under that system, the 2015 federal election as a whole scored a 12 per cent differential between the popular vote and seats in the House of Commons.

The same study says the Liberal Party—under the first-past-the-post system used in the 2015 election—are over-represented in the House of Commons by about 12 per cent, while Conservatives were underrepresented by 3 per cent and the New Democrats by 7 per cent.

The all-party committee recommended that the government not pursue mandatory voting, although acknowledged the success of compulsory voting in Australia, which had a 95 per cent electoral roll in its last election.

The committee called for the use of technology to promote greater accessibility for the vote, but recommended against implementing online voting.

The special committee on electoral reform consists of MPs from all political parties represented in the House of Commons, however opposition parties hold more seats on the committee.

Justin Trudeau’s Liberal government does not have to follow the committee’s recommendations.

Monsef’s consultation largely focused on the possibility of alternative voting systems and not on the preservation of the status quo.

Nunavut senator Dennis Patterson, who attended the consultation, argued at the time for a national referendum, adding that plebiscites have a long history in the North.

“We have a tradition [in Nunavut] of democratic participation in major decisions and I hope that the issue of consultation with the general public, not just with the MPs and senators… will include some way of canvassing the citizens of Canada before some decision is made,” Patterson told Monsef at the consultation, Aug. 29

“I think the conventions in the North point to that direction.”

The committee’s full report, and its recommendations, can be found on the Parliament’s website here.