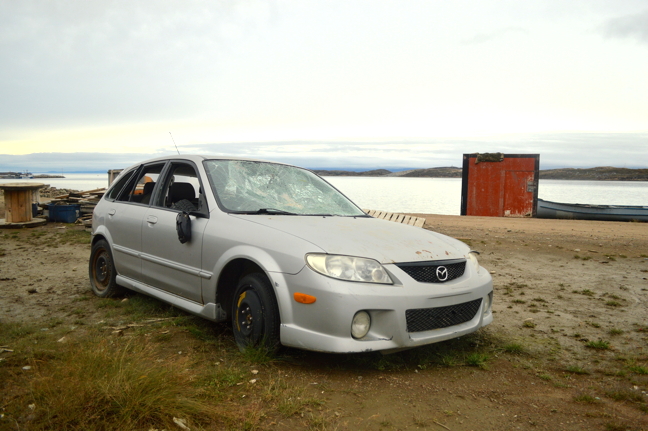 A four-to-three vote at Iqaluit city council Oct. 18 resulted in councillors passing a motion to increase the car disposal fee to $500 from the previous $200 charge. (FILE PHOTO)

The City of Iqaluit will continue subsidizing the disposal of old cars, following a narrow vote by city councillors Oct. 25 to reduce a proposed fee hike that more than quadrupled the cost for turning in an old vehicle to the city.

Starting in January, Iqalungmiut will pay $500 for the city to properly drain, dispose of and—eventually—ship their scrap cars back south.

The disposal charge has been a bone of contention among councillors as they’ve deliberated over the city’s updated Consolidated Fees Bylaw, which compiles all of the city’s fees and services under one document, while also updating many of them.

Councillors passed that amended bylaw at the same meeting.

Council split four to three in favor of a motion by deputy mayor Romeyn Stevenson to halve the proposed $1,000 fee, which was billed as the actual “at-cost” price of disposal for the city.

“It’s too much money,” Stevenson said, but reiterated his support for a future Nunavut-wide car disposal levy of $1,000 for new vehicles entering the territory.

“I think we all need to be responsible members of Iqaluit and we need to pay for vehicles to be shipped out. The city is not being frivolous by asking you to pay for how much it takes to take it out,” Pizzo-Lyall said, adding that she supported a payment plan for the charge.

“Every single one of us, when we were running for council last year, decided we were going to reduce the deficit. We’re not reducing the deficit by charging people less than it costs to deal with it.”

On the other side of the coin, Coun. Matshazi said even $500 was too high and also suggested the city adopt a payment plan for the fee—much like was proposed for the territorial fee.

Stevenson noted that the Consolidated Fees Bylaw, which includes the car disposal fee, allows for citizens to pay a reduced fee for any of the city’s services if they can prove financial hardship.

As it’s currently outlined in the bylaw, that would be done before a three-person committee consisting of the mayor or deputy mayor, the chief administrative officer and the director of corporate finance.

Pizzo-Lyall successfully passed a motion to freeze all fees under the new bylaw until Jan. 1, 2017, allowing for the city’s communication department to begin a public awareness campaign on the new charges.

That means Iqaluit residents looking to cash out on the cheaper $200 fee for disposing their vehicles have until the end of the year to do so.