“I was encouraged by the questioning that the judges had. I really appreciated that they made an extra effort to ensure that Indigenous rights are at the forefront” 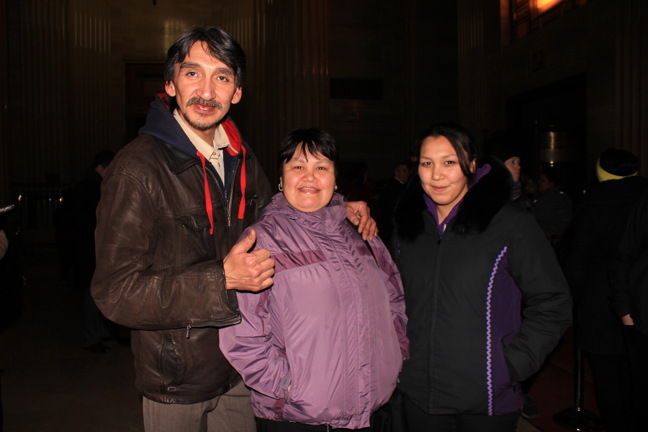 Jerry Natanine with his wife Christine and daughter Clara in the lobby of the Supreme Court of Canada Nov. 30 following a hearing before the court’s nine judges on whether Inuit were properly consulted before the National Energy Board granted a consortium of companies permission to conduct seismic testing off the east coast of Baffin Island in 2014. (PHOTO BY LISA GREGOIRE)

OTTAWA—As Supreme Court judges took an afternoon break Nov. 30 from considering legal arguments in the Clyde River seismic testing case, the hamlet’s former mayor Jerry Natanine left the courtroom angry and discouraged with how his lawyer had been picked apart by the justices.

But after witnessing the second half of that hearing, where the judges were equally merciless of the seismic proponent’s lawyer, Natanine said he had renewed hope that Inuit concerns will get a fair hearing in what some describe as a historic case for Aboriginal rights.

“Emotions going up and down. I get angry, I get happy again. Holy cow,” said Natanine who attended court with his wife Christine and daughter Clara.

“What it comes down to is the duty to consult. That’s what we’ve been after: how the Crown delegated or didn’t delegate—whatever—that duty.”

It was a case four years in the making and Natanine, who’s been shuttled from one media interview to the next since arriving in Ottawa a few days ago, said he’s relieved it’s now over and in the hands of the court. And he’s grateful for all the support he’s received.

“I’m so humbled by it. I didn’t expect it. But I’m very grateful. I cannot say how much I am grateful.”

In a joint hearing at the Supreme Court of Canada, the nine justices heard two cases that pit the National Energy Board against the Aboriginal right to be properly consulted on projects that impact their traditional lands and waters as dictated by section 35 of the Canadian Constitution.

The Inuit of Clyde River are fighting to stop seismic blasting for hydrocarbons off the coast of Baffin Island and they feel the NEB process—which allowed the companies to lead the public consultation and then granted those companies permission to go ahead with seismic testing—failed to satisfy their constitutional rights.

The other case involved the Chippewas of the Thames First Nation who argued the Crown did not have the right to discharge its duty to consult to the NEB in a case involving changes to Enbridge Pipelines Ltd.’s Line 9 crude oil pipeline, which goes through their traditional territory.

As with the Chippewas, the Inuit case hinged on whether the National Energy Board, a quasi-judicial tribunal appointed by the federal cabinet, can satisfy the Crown’s “duty to consult” or whether, as the Inuit argue, only the Crown can engage in meaningful nation-to-nation consultation and accommodation.

Lori Idlout, a University of Ottawa law student who was at the court, said she was pleased to have witnessed such an important case in the evolution of Inuit rights in Canada.

“I really wanted to be inside that decision-making process where it feels like some framework will be established to help develop a relationship toward reconciliation between Indigenous people and the Crown,” Idlout said, after the hearing.

“I was encouraged by the questioning that the judges had. I really appreciated that they made an extra effort to ensure that Indigenous rights are at the forefront of these issues.”

P.J. Akeeagok, president of Qikiqtani Inuit Association, watched proceedings from the hot, crowded Supreme Court main chamber—lucky to get a seat as dozens of others were forced to watch the case unfold via video links in other rooms and even in the lobby where chairs and a video screen had been set up for overflow.

Akeeagok said the QIA paid for four people from Clyde River to travel to Ottawa for the case and that he too was hopeful that Inuit concerns about harvesting and food security might lead to procedural changes in how Ottawa, and companies, negotiate development in Nunavut.

“There’s a misunderstanding in terms of what adequate consultation means,” he said.

“We want to be participants. That’s all we’re asking, at the end of the day, is that we want to be able to sit at the table and participate all throughout in the process, with proper information presented to us.”

Okalik Eegeesiak, president of the Inuit Circumpolar Council-Canada, told the Nunatsiaq News that many Inuit welcome development, but on their own terms.

“We just want to be able to say when and where and how,” Okalik said. “We hope the Supreme Court hears this cause and we look forward to the outcome.”

If you’d left at the afternoon break and not returned, you might have concluded that Clyde River Inuit were doomed.

For an hour, Clyde River’s lawyer Nader Hasan fielded a hail of questions like a solo outfielder at the World Series, rifling through his written submissions for answers, precedents and proof.

Between frequent sips of water, Hasan attempted to address the complex legal questions tossed at him, often managing only half an answer before someone lobbed another doozy.

Chief Justice Beverley McLachlin cut to the chase early on, wanting to know specifically what sort of consultation occurred in Clyde River between 2012 and 2014—when the NEB approved the seismic project—what was missing, what should have happened and why. Other justices chimed in afterward, seeming to repeat that request.

It took a while for Hasan to get around to those specifics, explaining that “deep consultation,” as prescribed by case law, should have included, among other things, Crown presence, meaningful Inuit participation, acknowledgement of language and cultural barriers and a full public hearing.

Several times the justices demanded proof that Aboriginal rights had been at the forefront throughout the seismic consultation process.

Justice Andromache Karakatsanis said she read through the NEB’s environmental assessment report, which formed the basis for the board’s decision to allow seismic testing, and she did not see the words “Aboriginal rights” mentioned once.

Carpenter conceded that could be true but that “it was not lost on anybody here” that this case involved the Inuit constitutional right to be consulted. He said that in his opinion, Inuit were satisfied with the process until the end, just before the NEB issued its decision.

“I wanted to yell out ‘No! He’s lying!’” Natanine said later, describing what he thought of that statement.

“If we were happy, then the company would not have been told never to come back to Clyde River. There was nothing happy about us. Nothing good about it all.” Then Natanine struck a rapper’s pose and said, “Seismic testing? Fuck that noise.”

Natanine said Inuit participated in open houses and question-and-answer sessions set up by the seismic companies, but didn’t consider that to be Crown consultation.

Justice Russell Brown made that very point during proceedings. He asked Carpenter whether Inuit truly understood that this was their one chance at “official consultation.”

Justice Michael Moldaver asked how pro-active the Crown was in determining whether Inuit understood what was going on and whether the Crown offered Inuit access to expert or legal advice to inform their questions and opinions.

Carpenter said he didn’t think it was the Crown’s job to come up with a list of things Inuit might want to consider. In the end, Inuit made specific requests for information, the NEB passed those requests on to the proponents and the companies fulfilled those requests.

Given the final word, Hasan briefly took the podium again around 4:30 p.m.

“Never before has so little been made to mean so much,” he said, of the level of consultation afforded Inuit in the seismic testing project.

If the justices determine that it was enough, he warned, they will be establishing, “a new low water mark,” for Aboriginal consultation in Canada.

The justices reserved their decision. It generally takes four to six months before they issue a ruling.