Environment minister on the defensive over ozone monitoring cuts 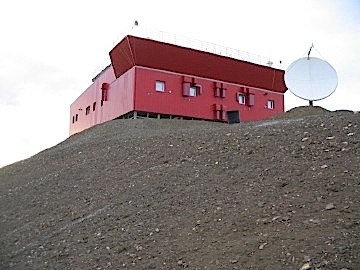 A team of scientists has been monitoring the destruction of the ozone layer above the Arctic from a research station in Eureka on Ellesmere Island. (FILE PHOTO)

Environment Minister Peter Kent and his senior officials were on the defensive Sept. 21 trying to quell national and international outrage over cuts to Canada’s ozone monitoring program.

Facing a barrage of questions in the House of Commons from the New Democrats, Liberals and the Green party, Kent said Environment Canada is “optimizing and streamlining” the way it monitors and collects ozone data.

Kent said the changes would not affect services but ensure that taxpayer dollars were spent in “the most prudent but still environmentally correct way.”

“That is what we were elected to do,” he told Green party leader Elizabeth May.

Karen Dodds, the department’s assistant deputy minister, seemed none too pleased Wednesday at they way her scientific staff have been sounding the alarm over the looming cuts.

“Some of my own scientists are not being fully transparent in terms of the facts in this situation,” Dodds said in an interview with Postmedia News.

The department will not, however, let the scientists speak for themselves. In a response to a request to interview the ozone scientists, Dodds stepped in to take questions Wednesday.

More than half the scientists in the department’s ozone science branch have received letters saying their jobs are “affected” by the downsizing underway at Environment Canada.

But Kent told the House “there is a great difference between letters to employees of Environment Canada advising them that they may be affected by workforce adjustment and separation from the department.”

“It is entirely possible that all of the positions will be accommodated through attrition,” he said.

Dodds said the letters to the scientists mean the positions are under review and suggested as few as half of them might be eliminated in coming months.

“Nobody has yet received a letter saying they are surplus, which means that there job is actually eliminated,” said Dodds.

Scientists at research institutes around the world have been informally told the Canadian ozone network will be shut down as early as this winter.

They expressed their dismay last week in a report in the British journal Nature that described the Canadian network as “a linchpin of Arctic ozone observation.”

The network consists of 17 monitoring stations from Nova Scotia to the High Arctic. Scientific balloons are launched from 11 of the stations at least once a week to get a read on the ozone layer, which protects Earth from the sun’s harmful ultraviolet radiation.

Environment Canada would not comment when the Nature report was published last week other than to say the ozone program was under review.

Kent and Dodds now insist the monitoring will continue, but in a more effective, efficient way.

“We’re saying we don’t need the same level of redundancy that we have now,” Dodds said, noting that the department now has two networks monitoring different aspects of the ozone.

“So instead of doing both measurements as frequently as we have and at as many sites as we have, it is quite possible, (and) scientifically rational, to move to a system that combines the two,” she said.

She said that monitoring will also continue in the Arctic, where a hole developed in the ozone layer this spring.

Dodds also said the government also wants to maintain the World Ozone and Ultraviolet Radiation Data Centre, an archive of data stored in Toronto that is used by researchers around the world. But she said management of the database might move to a different part of the department.

Thomas Duck, an atmospheric researcher at Dalhousie University, takes issues with many of Dodds’ comments and said there is “no redundancy” in the Canadian ozone monitoring system.

“I could get a lineup of scientists to tell her flat out that the statement [about redundancy] is not scientifically defensible,” he says.

If there were better ways to measure ozone, Ducks says the Environment Canada scientists would already being doing it. “They are using the best tools for the job, and to suggest they should do anything else is quite strange,” says Duck. “These are professionals who care about what they do, and what’s more, they are at the top of their game.”

Dodds says it is possible some of the scientists now in the ozone branch will be reassigned to other jobs that are “appropriate for their skills and their expertise.” And she suggested staff in other branches may take over some of the work now done by ozone scientists.

Duck says that “is tantamount to saying you can replace your surgeon with your dentist because they are both doctors.”

“These are very, very skilled people running very important programs,”‘ says Duck, “and they are being told they are no longer needed.”

He says it is managers, not scientists, who are deciding the fate of the ozone program and called on the government to be more “honest and transparent” about what is going on.