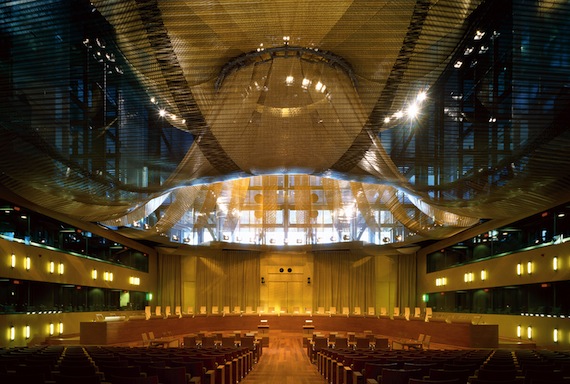 The large court room of the Luxembourg-based General Court of the European Union. (HANDOUT PHOTO)

The General Court of the European Union has dismissed the appeal by Inuit Tapiriit Kanatami and other parties to overturn the EU’s ban on seal products.

In its April 25 judgment, the court defended the ban, saying the EU-wide legislation harmonized laws in its 27 member nations and also provided an exception for Inuit seal products.

The appeal heard by the General Court stemmed from an earlier European Court judgment in September 2011, which found the 2010 EU seal product import ban did not “directly concern” the Inuit claimants or the organizations representing them.

The General Court said April 25 that the ban “protects the fundamental economic and social interests of Inuit communities which hunt seals as an integral part of their culture and identity.”

The EU ban, aimed to improve “the conditions of functioning of the internal market,” also took into account the protection of animal welfare, which “cannot be satisfactorily achieved by action undertaken only in the member states and requires action at EU level,” the court said in its ruling.

The General Court noted that the ban, by reassuring consumers that seal products are no longer marketed in the EU (apart from those which result from hunts by Inuit for the purposes of subsistence), also eliminated obstacles “to the free movement of alternative products (not derived from seals) which are impossible to distinguish from original products (derived from seals) which are similar.”

The General Court said that at the time of the adoption of the ban, the differences between the EU’s national governments in seal product regulations were likely to grow further.

The court also said it was not convinced by the argument from ITK and others “who pleaded the impairment of their right to property insofar as it relates to seals caught.”

The court said the ban does not prohibit the placing on the market of seal products “derived from traditional forms of hunting.”

The court said some of the appeal applicants, “who are of very different origins and, for the most part, do not belong to the Inuit community,” did not demonstrate the effects on their right to property.

“The General Court held, in line with the case-law of the Court of Justice, that the guarantees accorded by the right to property cannot be extended to protect mere commercial interests or opportunities, the uncertainties of which are part of the very essence of economic activity,” said the judgment. “On those grounds, the General Court dismisses the action.”

With the failure of the appeal, ITK, the Fur Institute and the other parties to the application must pay court costs that the European Commission incurred while defending its seal import regulation.

The court ordered that the European Parliament and the Council of the European Union must pay their own court costs.

The dismissal of the appeal comes as a “No Seal, No Deal” group is circulating a petition that asks Canada to block EU from Arctic Council status as an official observer.

The group plans to table the petition in the House of Commons by May 1.

A further legal challenge to the ban brought by the governments of Canada and Norway is under consideration by the World Trade Organization. A second hearing will take place next week in Geneva, Switzerland on April 29 and April 30.