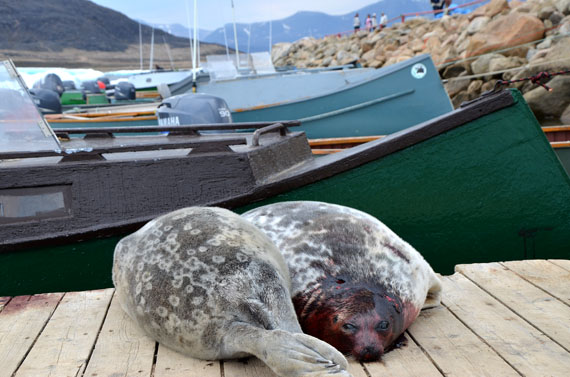 Ring seals lie on the dock in Qikiqtarjuaq. A new proposed regulation from the European Union Commission on trade seal products is intended to the sale of seal meat in EU-member nations. (FILE PHOTO)

A new proposed regulation from the European Union Commission on trade in seal products may help open the door a little wider to seal meat sales in the 28-EU member nations.

The proposal, discussed last week at a World Trade Organization meeting in Geneva, includes a commitment to develop a system in conjunction with Canadian authorities to ensure that Canadian Inuit have improved access to the EU market.

The proposal follows an announcement last October that Canada and the EU had struck a deal to ensure seal products harvested by indigenous people in Canada can be sold within EU member states.

The EU Regulation (EC) No 1007/2009, says “seal hunting is an integral part of the culture and identity of the Inuit and other indigenous communities and makes a major contribution to their subsistence. For those reasons, seal hunts traditionally conducted by Inuit and other indigenous communities do not raise the same public moral concerns as the hunts conducted primarily for commercial purposes.

“Moreover, it is broadly recognised that the fundamental and social interests of Inuit and other indigenous communities should not be adversely affected, in accordance with United Nations Declaration on the rights of Indigenous Peoples and other relevant international instruments.”

The proposal says “placing on the market of seal products shall be allowed only where the seal products result from hunts conducted by Inuit and other indigenous communities if the following conditions are all satisfied”:

•  the hunt has been traditionally conducted by the community;

• the hunt contributes to the subsistence of the community and is not conducted primarily for commercial reasons;

•  the hunt is conducted in a manner “which reduces pain, distress, fear or other forms of suffering of the animals hunted to the extent possible taking into consideration the traditional way of life and the subsistence needs of the community.”

The import of seal products will be allowed where this is of an “occasional nature and consists exclusively of goods for the personal use of travellers or their families.”

However, the proposal says” the nature and quantity of these goods” must say these are not being imported for commercial reasons.

In September 2014, Canada and the EU informed the WTO’s Dispute Settlement Body that they had agreed that the reasonable period of time for the EU to implement the DSB recommendations and rulings would be 16 months from the date of adoption of the panel report that June.

The Inuit dispute with the EU dates to May 2009 when the European Parliament voted to ban the importation of seal products within EU member states, with a vaguely-defined exemption for seal products harvested by indigenous hunters.

Since then, Canada, Norway and a variety of businesses and Inuit organizations tried and failed to overturn the ban in the European Court.

At the same time, Canada and Norway tried and failed to persuade the WTO that the EU seal ban violates international trade law.

In May 2014, the Appellate Body found that there was a de facto violation of the most-favoured nation treatment obligation because seal products from Greenland were treated more favourably than seal products from Canada through the exception for products derived from Inuit hunts.

It also found that the EU had failed to design the legislation to prevent arbitrary discrimination and should have made more efforts to encourage Canadian Inuit to use the exception.