Exotic bear harvested in Nunavut was a blonde grizzly 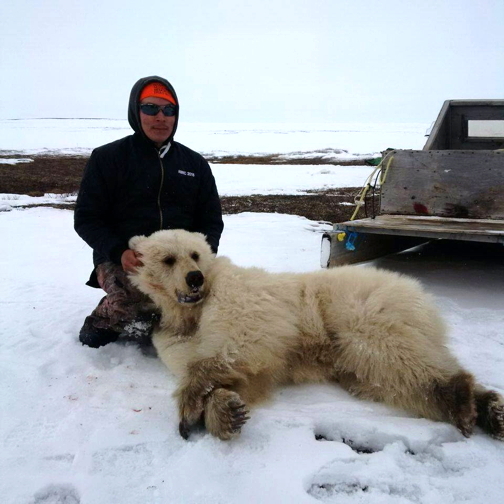 Didji Ishalook posted this photo and other photos of his latest catch on his Facebook page May 15.

A DNA test has confirmed that a bear harvested in western Nunavut recently and believed to be a grizzly bear-polar bear hybrid is actually just a grizzly bear with blonde fur.

That’s according to Nunavut’s environment department, which had a DNA analysis done of the female bear harvested in May about 120 kilometers outside the Hudson Bay community of Arviat.

“The DNA lab concludes that the animal was a blonde grizzly bear and it does not have a polar bear parent,” a spokesperson for the department told Nunatsiaq News June 21.

Local hunter Didji Ishalook created a minor Internet sensation May 15 when he posted to social media pictures of the bear he harvested.

Media reports, quoting experts from the US or southern Canada instead of from Nunavut, then surfaced full of assumptions, a regional wildlife manager with the Government of Nunavut told Nunatsiaq News June 21.

“Everyone wanted to jump on the hybrid bear train,” said Mathieu Dumond, from Kugluktuk.

In reality, grizzly bears with blonde fur are “not uncommon,” and are often seen, especially in western Nunavut, Dumond said.

“It seems to be more frequent in spring or early summer, when the bears come out from hibernating. Then they shed and have a little more saturated colour in their fur.”

Environmental factors, such as sun exposure, can also lighten a grizzly bear’s fur from the well-known chocolate-brown colour, Dumond said.

To determine whether the bear harvested by Ishalook was a blonde grizzly or a hybrid bear, GN carnivore biologist Malik Awan told Nunatsiaq News May 18 that a DNA sample would be analyzed.

“The harvested bear was not a hybrid,” the government confirmed June 21, perhaps to the disappointment of many readers and researchers alike.

“Some otherwise pretty renown bear biologists jumped on the hybrid bear story without even knowing what they were talking about,” Dumond said.

“I think it was something blown out of proportion, with the wrong information to start.”

There have been two or three confirmed cases of hybrid polar-grizzly bears, Dumond said, all from an area west of Victoria Island.

And because the two species are so closely related, hybrid bears can thrive and can also reproduce, the biologist said.

“But that doesn’t mean it happens often or that it’s going to happen more often. It may, but polar bears have a healthy population and so do grizzly bears.”

“Unless they’re like people and have their own preferences, they’ll mate with any other grizzly.”