Facebook clamps down on online sales of seal-skin products

“Failure to comply may result in a variety of consequences, including the removal of posted content” 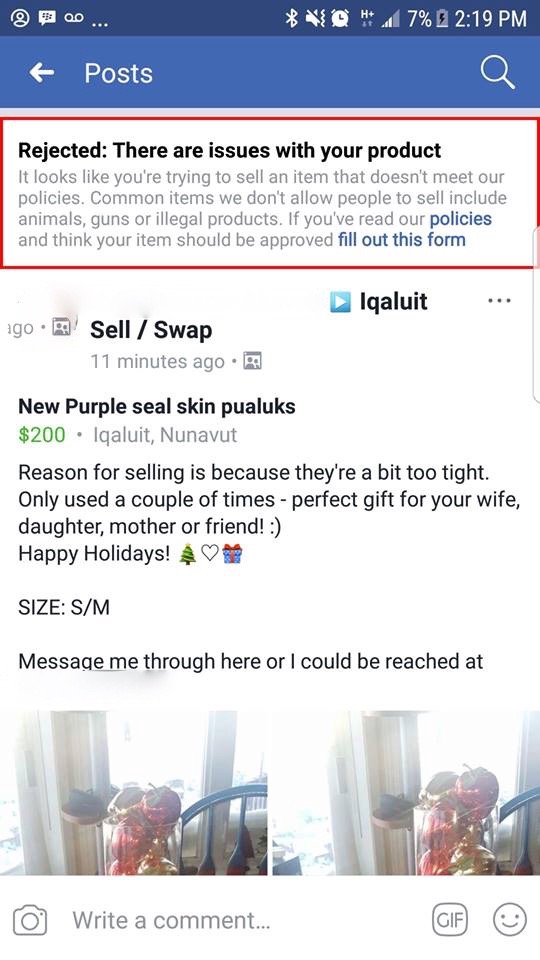 Inuit sewers who want to sell their seal-skin creations on Facebook have recently seen their postings refused.

That prompted an Iqaluit woman, a member of one of Iqaluit’s two sell-and-swap Facebook pages, which together have nearly 30,000 members, to ask “can somebody explain this to me please?? No animals, guns or illegal products trying to be sold here—why was my post rejected?”

It turns out Facebook’s commerce policy does not allow the sale of animals, living or dead—and animal parts, including pelts.

Even the mention of seal skin seems to be enough to raise the attention of Facebook and generate a warning: “Rejected: There are issues with your product. It looks like you’re trying to sell an item that doesn’t meet our policies. Common items we don’t allow people to sell include animals, guns or illegal products.”

Other content prohibited on Facebook includes Illegal, prescription or recreational drugs, tobacco products—such as snuff, which has also been advertised on Facebook in Nunavut—and related paraphernalia, as well as adult products or services and alcohol.

Facebook says its commerce policies “provide guidance on what types of products and services can be offered for sale on Facebook.”

Facebook states that sellers are also responsible for complying with all applicable laws and regulations.

To get around the policy, some Nunavut posters have suggested posting on their personal page and then sharing into the group, or using Inuktitut words to describe the item for sale.

On the Facebook pages offering country foods, many have not posted photos and also use Inuktitut words to sell their cuts.

Still, as news about the enforcement of the Facebook policy circulates, there’s worry that this clamp-down could harm the livelihoods of those who work with seal skin, with one Iqaluit man suggesting on Twitter that the new “Facebook rules are hurting the local Nunavut economy.”

The Government of Nunavut estimates that seal-skin products alone are worth an additional $1 million to the territory’s arts and crafts sector.