Fancy footwork: a look at boots around the circumpolar world

“The labour that goes into these is incredible” 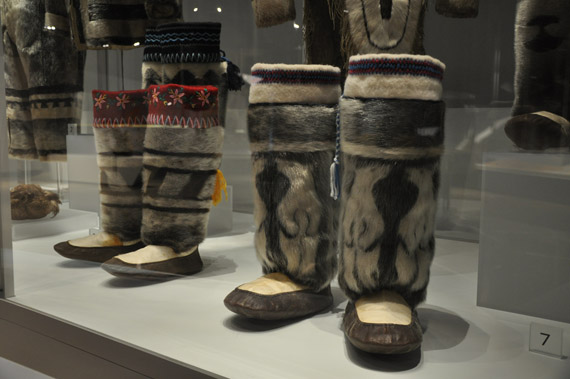 Iglulingmiut seamstress Leah Okadluk made these men’s kamiit in 1987, complete with an intricate fur inlay of two polar bears gazing at each other. (PHOTO BY SARAH ROGERS)

TORONTO — There’s an Inuit saying that goes something like “a man is what his wife makes him.”

And a walk through the newest exhibition at Toronto’s Bata Shoe Museum could easily convince you that hunters in the circumpolar world are among the most sophisticated and best-dressed, thanks to the skilled Inuit, Saami and Chukchi seamstresses they partner with.

Art & Innovation: Traditional Arctic Footwear, features a range of circumpolar attires — boots, parkas and tools — that illustrate both the beauty and the science in dressing for an Arctic climate.

The exhibit takes visitors though the thigh-high, colourfully-decorated kamiit of Greenland or their Sápmi equivalent, to the monochrome fur designs crafted by Canadian Inuit.

Take the design of the kamik in what we now know as Nunavut — Inuit women developed tailoring techniques that distribute heat to the entire body.

For the coldest months of the year, inner and outer boots were layered to make the most use of the skins. Semmelhack points to the liners of one pair, which are made of baby seal and caribou. These were worn underneath inserts made of furred seal, with sealskin boots over top.

The design helped funnel hot air up around the legs and torso, which eventually came out from the parka’s hood to keep the hunter’s face warm.

“By layering in this manner, the feet really generate a lot of heat,” she said. “The labour that goes into these is incredible.”

The design doesn’t end there. Adorning one pair of men’s kamiik are two sets of two polar bears gazing at each other, crafted by Iglulingmiut seamstress Leah Okadluk, originally from Arctic Bay, in 1987.

While it might look like the white bears have been dyed that way, this is an impressive example of fur inlay, a technique used by Inuit seamstresses to create patterns on clothing and footwear by using different pieces of fur, pieced in different directions.

From 1970s until the 1990s, University of Manitoba researchers Jill Oakes and Rick Riewe did fieldwork to document traditional boot making in the circumpolar world, including western Canada’s Arctic, western Greenland, coastal Alaska, eastern and western Siberia and Sápmi.

They returned with the riches of the North: sealskin, caribou and reindeer fur, delicate beading and the bone-based tools used to make clothing.

“As one hunter in Arviat explained, his skin clothing was more important than his skidoo or gun,” the researchers recalled. “Our research focuses on facilitating the sharing of northern peoples’ stories that their clothing tell and documenting diversity throughout the circumpolar region.”

Below are some of the other pieces featured in the museum’s collection. Photos are all courtesy of the Bata Shoe Collection.

These knee-high red, pieced sealskin kamiit were made by Laurie Jeremiassen for her silver anniversary in 1955.

One of the things that sets Greenlandic footwear making apart from other regions is the use of tiny pieces of sealskin to adorn the item, a technique that is called avittat.

Semmelhack notes the European influence on Greenlandic footwear and clothing design, with its colourful and sometimes flowered prints.

These fish skin kamiit were made by Inupiaq seamstress Eliza Chase in 1992. The boots were crafted with salmon skin for its waterproof qualities, and tanned with urine.

The traditional Sápmi boot is made of reindeer fur, with an upturned toe. The upturned toe helps connect the boot to cross country skis.

These thigh-high Chukchi boots are made of prized white reindeer, crafted by seamstress Natasha Moldanova during the 1980s. She used coloured strips of wool to highlight the seams of the boot, as well as the seam under the knee that identifies the wearer as a male.

Boots like these are worn to the region’s annual reindeer festival held each March.

These are traditional needles made of bird bone. In Inuit culture, men were responsible for making all the women’s tools, while the women would in turn fashion all the men’s clothing and footwear.

The Bata Shoe Museum’s Traditional Arctic Footwear is a semi-permanent exhibition that will be on view for several years.