As Arctic sea ice heads towards its maximum extent for the year some time this month, its measured extent in February 2014 was the fourth lowest since 1979, the National Snow and Ice Data Centre said last week.

The lowest February measurement of Arctic sea ice extent in the satellite record occurred in 2005, the Colorado-based centre said.

There were periods of declining ice, likely related to changes in ice motion, the centre said.

Ice extent increased at an average daily rate of 14,900 square kilometres per day during the month.

As the maximum sea ice extent approaches, usually in the middle of March, the daily rate of ice growth is expected to slow.

Temperatures in the Arctic have been warmer than average, the centre noted, with temperatures ranging from four to eight degrees Celsius above average February. 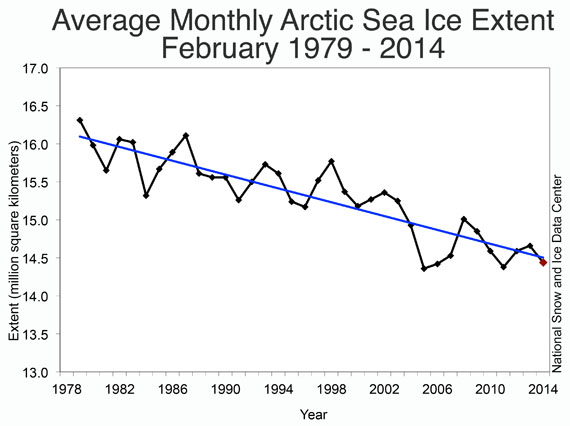 This graph shows how average Arctic sea ice extent for February has dropped since 1979. (IMAGE COURTESY OF THE NSDIC)