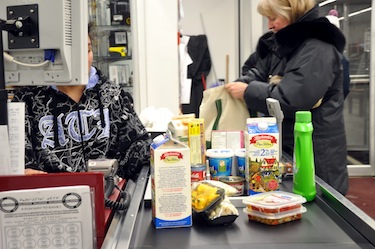 A shopper stocks up on groceries at Newviq’vi in Kuujjuaq, one of more than 100 communities that benefits for food subsidies under Nutrition North Canada. (FILE PHOTO)

Changes to the federal Nutrition North Canada program could be on their way.

Aboriginal Affairs and Northern Development Canada posted a request for proposals Jan. 26, looking to “develop subsidy models and support an engagement with communities for the Nutrition North Canada program in 2015-16.”

Launched in 2010 to replace the federal government’s food mail program, Nutrition North spends about $60 million a year to offset the high cost of food in Northern and isolated communities.

But the program has been the focus of criticism by communities in Nunavut and Nunavik since its creation, with many saying they see fewer savings under the program.

A report released by the Auditor General’s office last November found that the program does not ensure that northern retailers pass the full air freight subsidy onto consumers.

The report noted that AAND does not collect information from retailers on their profit margins to ensure they’re in full compliance.

To fix that, the auditor general recommended the program’s contribution agreements be changed to include information on their profit margins that retailers get on subsidy-eligible food items.

“In the coming months, our government will also be engaging with Northerners, retailers and suppliers on ideas to keep improving the program,” Valcourt said.