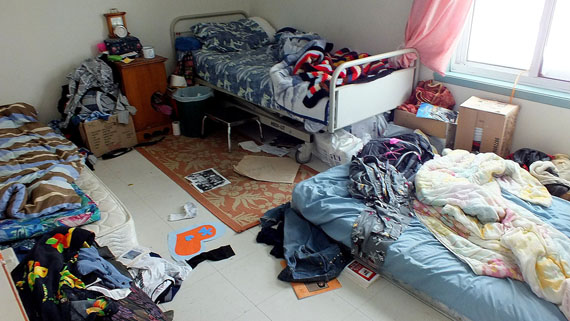 A Salluit woman submitted this photo of a single bedroom she shares with her grandchildren to illustrate overcrowded housing conditions in Nunavik. (PHOTO COURTESY OF MAKIVIK CORP) 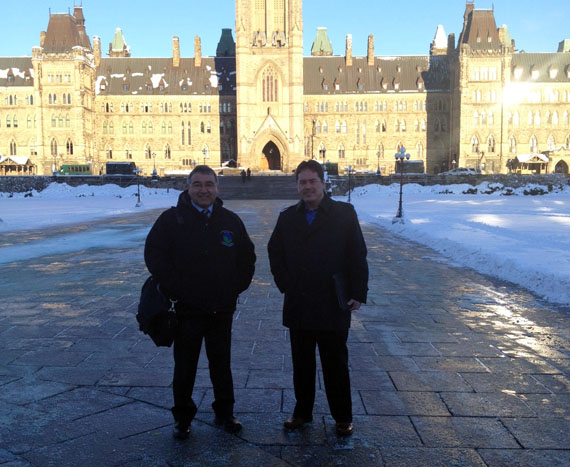 Jobie Tukkiapik, the president of Makivik Corp., left, and Michael Gordon, the Makivik vice-president of economic development, on Parliament Hill Nov. 28 on their way to a meeting with Bernard Valcourt, the minister of Aboriginal Affairs and Northern Development. (PHOTO COURTESY OF MAKIVIK CORP)

For the past several months, Makivik has pursued the federal government to pay for a long-sought-after catch-up program to build enough housing in Nunavik to end the region’s housing crisis.

That, Makivik says, ought to flow from Ottawa’s obligations under the James Bay and Northern Quebec Agreement.

“We felt that it was a good meeting, he sounded genuinely concerned about the effects [the housing crisis] has had on children in Nunavik,” said Makivik president Jobie Tukkiapik about the meeting with Valcourt.

Tukkiapik said he explained to Valcourt that because there was no new housing construction between 1994 and 1998, Nunavik now needs 899 new houses — a figure from the latest survey of housing produced by the Kativik Municipal Housing Bureau.

“In order to address this situation, funding is immediately required, over and above existing agreements, to build additional houses,” Tukkiapik said. “I hope the federal government is not creating the budget surplus, recently announced by [federal finance] minister [Jim] Flaherty of $3.7 billion, by not spending the monies we need for housing.”

During the Nov. 28 meeting, which lasted over an hour, Valcourt promised to take Makivik’s concerns back to the federal government and revisit Ottawa’s legal obligations to the region, Tukkiapik said.

Makivik has said Ottawa’s failure to live up to its obligations under the JBNQA has resulted in a housing crisis that leaves 68 per cent of Nunavik’s population stuck in overcrowded housing.

The JBNQA, signed in 1975, says that “the existing provision of housing… to Inuit shall continue, taking in to account population trends, until a unified system, including the transfer of property and housing management to the municipalities, can be arranged between the regional government, the municipalities and Canada and Quebec.”

Canada and Quebec negotiated a transfer agreement in 1981, but Makivik and the Kativik Regional Government opposed it and never signed it. They take the position that this land claim provision has not been implemented and the federal government is obliged to create a social housing catch-up program for Nunavik.

Due to failed negotiations over the JBNQA implementation, Makivik instituted a dispute resolution mechanism in 2011.

In a September 2012 report, mediator Dominique Bourcheix found that Canada did not act in good faith during the renegotiation of a 2010-2015 housing agreement and encouraged both sides to return to the table.

Makivik has since been told the federal government is looking to Nunavik’s Inuit organizations to come up with new models to address the region’s housing needs.

But Tukkiapik said Nunavik’s model, whereby Makivik delivers housing through a non-profit construction agency, had produced hundreds of new housing units to the region — with money from the Quebec government.

“They said they’re looking for innovation but I think that’s already there,” Tukkiapik said. “We’re not squandering money on the housing program.”

In a Nov. 28 email from Valcourt’s press secretary Erica Meekes, she said the minister had no further comment as “this was a private meeting.”

Makivik plans to follow up on the meeting with a letter to Valcourt, Tukkiapik said.

“We have to keep the pressure on the government so this is not forgotten,” he said. “It’s an extremely important file for us.”