The icebreaker will carry nickel and copper to Europe 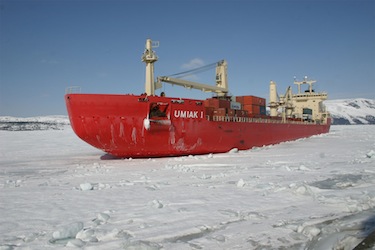 Concentrate from Nunavik Nickel project will be shipped to Europe on an icebreaker similar to the Umiak I, an ice-strengthened bulk carrier constructed for the Voisey’s Bay Nickel Company. (HANDOUT PHOTO)

The Fednav Group and Canadian Royalties Inc. have signed long-term contract for the transportation of nickel and copper concentrates from Canadian Royalties’ Nunavik Nickel Project to Europe and to ship in from mine supplies and equipment to the mine.

Speaking yesterday at the 5th Arctic Shipping North America conference, Thomas Paterson, a Fednav vice-president, announced Fednav has the placed an order with Sumitomo Corporation and Universal Shipbuilding Corporation, Japan, for the design and construction of an ice-breaking bulk carrier.

The Polar Class 4 vessel, which will be built at Universal’s Tsu shipyard and classed by Det Norske Veritas, is set to arrive in December 2013.

Fednav already owns and operates two of the world’s most powerful ice-breaking commercial vessels, the MV Arctic and the MV Umiak I, which services the Voisey’s Bay nickel mine in northern Labrador.

Based in Montreal, Fednav operates year-round in ice-covered waters, and has the world’s largest fleet of ice-class vessels.

Canadian Royalties Inc. is a mining company based in Quebec and owned by Jilin Jien Nickel Industry Co. Ltd. of China through its Canadian subsidiary Jien Canada Mining Ltd.

This past August Jien took over the formerly Canada-owned junior mining company with a takeover bid worth $192-million.

Its Nunavik Nickel project is located 20 kilometres south of Xstrata’s Raglan nickel. There, the company is building a group of mines feeding a central processing facility, which will produce nickel and copper concentrates as well as platinum by-products.

Makivik Corp., Canadian Royalties Inc., and representatives of three affected communities first signed an impact and benefit deal in 2008, which was agreement was renewed with senior staff from Jilin Jien Nickel Industry Co. Ltd. in Kuujjuaq in 2009, according to information from the Canadian Royalties website.