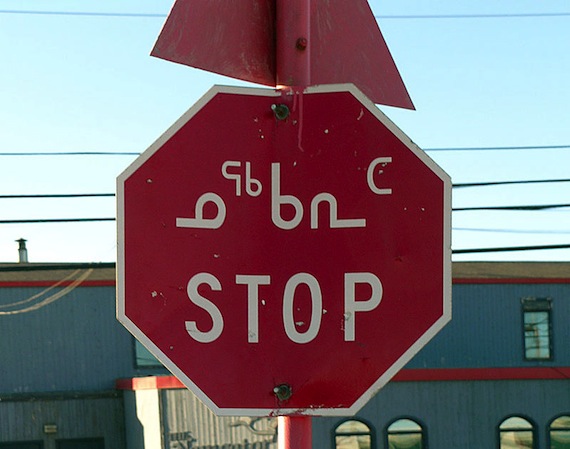 A stop sign in Inuktitut and English in Iqaluit: Nunavut will get $15.8 million to stop the decline of Inuktut in the territory, Ottawa said May 26.

The promotion and protection of Inuktut will see a $15.8 million boost.

That comes after the ratification of agreements between Ottawa and the governments of the Northwest Territories and Nunavut, which divide money set aside in the 2016 budget to support the preservation of Indigenous languages, announced May 26 in Yellowknife by Michael V. McLeod, MP for the NWT.

“We are thrilled with this new multi-year agreement,” said George Kuksuk, Nunavut’s minister of Languages, in a May 26 news release. “This is an initial positive step toward the establishment of a new partnership with the federal government with regard to the protection and promotion of Nunavut’s official languages.”

Kuksuk said the money would help slow the decline of Inuktitut and revitalize and support Nunavut’s education, professional and community sectors.

With this agreement, the GN will be better able to meet the requirements of the Official Languages Act and the Inuit Language Protection Act, he said.