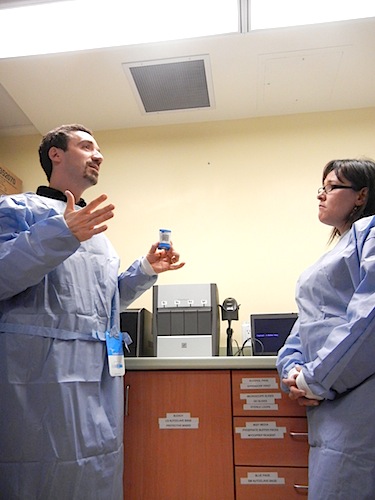 Dr. Gonzalo Alvarez explains how the Qikiqtani General Hospital’s new TB-tester works to federal Health Minister Leona Aglukkaq during a March 22 tour of the hospital’s laboratory. Bought by the Government of Nunavut, the new device’s testing will be covered by a three-year $350,000 grant from the Canadian Health Research Institute.(PHOTO BY JANE GEORGE)

Two days before World TB Day, which falls March 24, the focus in Iqaluit was on fighting Nunavut’s sky-high tuberculosis rates through a combination of community-based programs and a new digital diagnostic device.

The device, described by national Health Minister Leona Aglukkaq as “smaller than a microwave” and about the size of a computer hard-drive by her territorial counterpart, Keith Peterson, the Xpert MTB-RIF will help curb TB in Nunavut, the two health ministers said.

That’s because the new machine can do an automated test for TB and evaluate antibiotic resistance in 90 minutes, eliminating long waits and delays that occur when samples are sent to labs outside Nunavut.

The new machine, purchased by the Government of Nunavut, is an important step in fighting TB, Aglukkaq said.

In Nunavut, active TB infection rates are the highest when compared with all other Inuit regions in Canada, and 66 times higher than the Canada-wide rate.

Half of the active TB cases in Nunavut are among young people 15 to 34 years old, mainly from Iqaluit and Cape Dorset.

Last year there were 75 new cases of active TB in Nunavut, according to numbers tabled in Nunavut’s legislature in February.

But the World Health Organization estimates that a person with active TB can infect up to 10 to 15 people a year.

So, based on the WHO transmission estimates, Nunavut could have more than 1,000 cases of active TB.

TB, an infectious bacterial disease, is highly contagious and while it is curable with antibiotic treatment, it can be fatal if left untreated.

TB preys on people whose general well-being is already weakened by poor diet, smoking and alcohol abuse. Crowded housing — which affects many in Nunavut — also encourages the spread of the disease.

However, without screening, most people infected with the tuberculosis bacillus, or germ, don’t become ill or even know they are infected because the germ can lie dormant in a person’s lungs for many years.

That’s where the Taima TB program comes in, with its ambitious combination of public education, social media outreach, door-to-door screening and treatment.

Launched last April in Iqaluit around the motto “get tested before you get sick,” Taima TB (whose name roughly means “stop TB” in Inuktitut) aimed to improve screening for TB and treatment for people with active TB cases.

It also sought to reduce the overall number of TB cases in Iqaluit, which accounts for half of Nunavut’s annual TB cases, by using the Inuit language to talk about how to prevent the spread of the disease.

Dr. Gonzalo Alvarez, an Ottawa-based lung specialist and researcher at Ottawa Hospital Research Institute, announced March 22 that the Taima TB program will continue in 2012-13 and will expand to two other Nunavut communities.

Of 300 people screened by Taima TB in Iqaluit, about a third were recommended for treatment and four active cases were detected, he said.

The good news is the campaign seems to have encouraged more people in Iqaluit to get tested for TB, with double the number of walk-ins coming to the public health office for screening.

Alvarez isn’t promising that TB numbers will drop immediately, because “these changes don’t happen in six months or even a year.”

The GN will pay for the salary of an Inuktitut-speaking “TB champion” and a Taima TB co-ordinator.