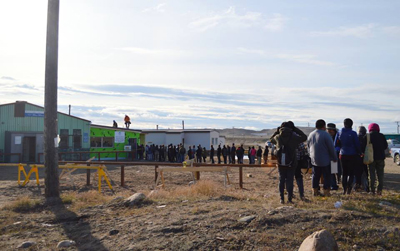 Iqaluit residents line up at the city’s cold beer and wine store, which opened one year ago on Sept. 6. The Government of Nunavut is looking for feedback from the public on the pilot project. An online survey is available until Sept. 28 and a paper survey can also be filled out in person at the store. (FILE PHOTO)

The Government of Nunavut wants to hear your views on Iqaluit’s beer and wine store.

In time for the one-year anniversary of the store, the GN announced on Wednesday, Sept. 5 that it’s looking for feedback from Nunavummiut on the pilot project’s impact on the community.

Up until Sept. 28, anyone living in Nunavut over the age of 19 can share comments through an online survey, or on paper, in person at the Iqaluit beer and wine store, according to a news release.

This announcement comes a week after the purchase limits at the store were changed to be more flexible than they had been previously. Each person used to only be able to buy 12 cans or bottles of beer and two bottles of wine per day.

Now, each customer is allowed to choose between any of these options:

This survey takes about 10 to 15 minutes to fill out.

The Government of Nunavut says all survey answers are kept confidential.

“The GN hopes to reduce binge-drinking, combat bootlegging, and encourage responsible alcohol use in Iqaluit, by offering alcoholic beverages with a lower alcohol-content, like beer and wine, at the store,” the news release states.