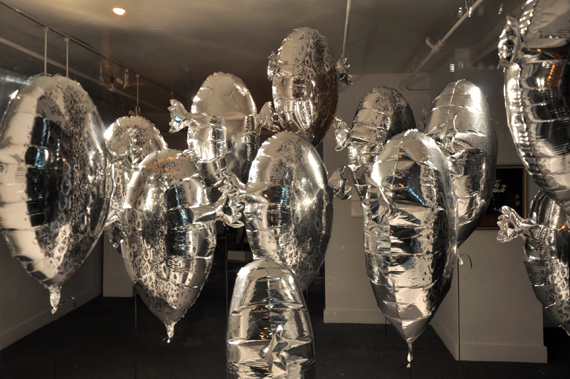 Couzyn van Heuvelen’s piece Avataq, a re-make of the traditional sealskin float, this time in foil. (PHOTO BY SARAH ROGERS) 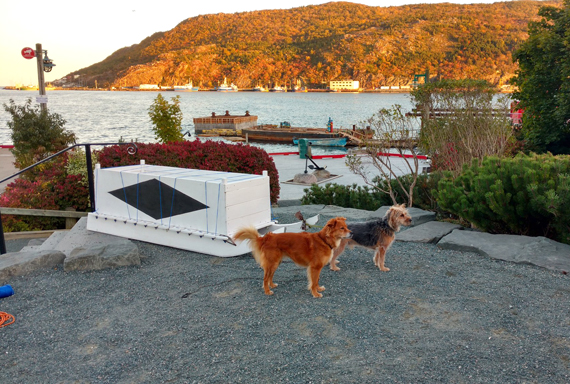 Two four-legged models wait to be hitched up to a qamutik along St. John’s waterfront where Nunatsiavut artist Mark Igloliorte was drawing pet portraits Oct. 8. The project coincided with the Inuit Studies Conference which unfolded in St. John’s, NL, Oct. 7 to Oct. 10. (PHOTO BY AMY PROUTY) 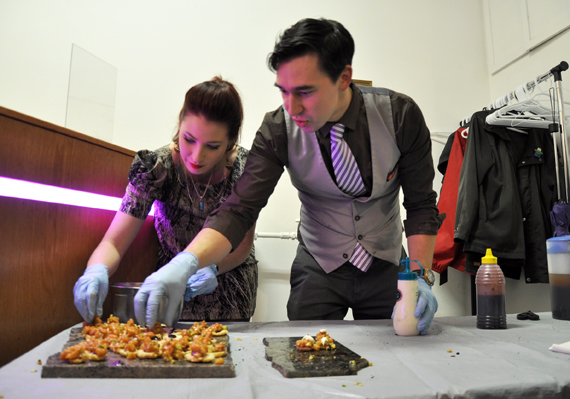 ST. JOHN’S—There was a definite buzz around St. John’s this past weekend as Inuit art and culture descended on Newfoundland and Labrador’s capital city.

The city, already home to a population of 700 mostly Nunatsiavut Inuit, was simply “taken over by Inuit,” as Nunavut Inuit Youth Council President Maatalii Okalik described it.

That buzz peaked Oct. 8, when the word on the street was there was free country food on offer.

Not just country food but elegantly-assembled canapés with smoked char, berry gastrique and roe stacked on a flummy—the Labrador name for bannock.

In an art gallery along the city’s waterfront, Nunatsiavut chef Justin Igloliorte stacked flummies for the crush of visitors who were also offered a Spruce Manhattan—a locally infused version of the famous cocktail.

In the adjoining room was a Barry Pottle photography exhibit featuring county food feasts in Ottawa. At the back of the complex, three pairs of throat singers from across Inuit Nunangat performed atop a pedestal.

This was just one of the stops along the nighttime art and culture crawl, cleverly named iNuit blanche, a play on words from the French term “nuit blanche,” or sleepless night, which has come to denote all-night art events around the world.

This was clearly the conference’s most art-focused event, coinciding with two other major events: the launch of Sakkijâjuk, an extensive exhibit of art and craft and iNuit blanche’s sister festival, katingavik, which featured film screenings and concerts throughout the weekend.

As the sun set Oct. 8, St. John’s dog owners lined up at the city’s Harbourside park, pets in tow, for a chance to have their portraits taken.

Nunatsiavut artist Mark Igloliorte (Justin and Heather’s brother, in case you’re wondering) set up a qamutik along the waterfront complete with harnesses to hitch up pets.

Igloliorte said his “Komatik Project” was mostly just for fun, but he also hoped to prompt a discussion around the role of sled dogs in the Arctic.

Further up Water Street, Marjorie Tahbone’s hands might have been the busiest all evening. The Alaskan Inupiat tattooist applied glow-in-the-dark body paint versions of traditional tattoos to a never-ending line-up of festival-goers.

“Everything in our tattoos is interconnected to everything else,” Tahbone told a curious crowd, explaining the history and recent revival of the traditional tattoo, or kakiniq.

Many festival-goers ended the night at the Ship Pub, crushing together in the crowded bar to watch Jaaji Okpik’s Twin Flames and Kathleen Ivaluarjuk Merritt perform with a variety of Nunavut musicians as Iva.

If anyone in St. John’s had a sleepless night Oct. 8, blame it on the Inuit art lovers.