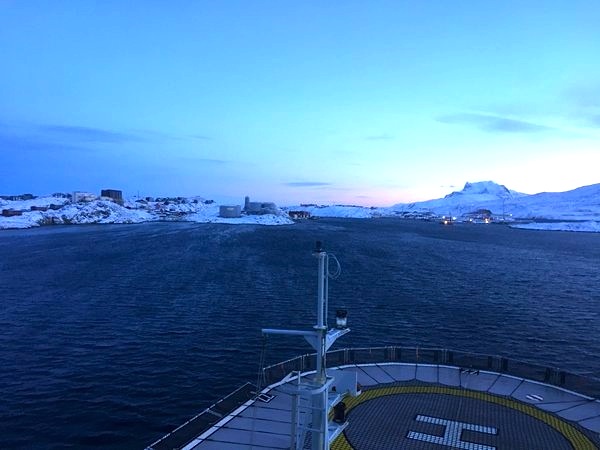 Ice pilot and navigator Duke Snider catches the view from the deck of the Nordica Oct. 31 as the icebreaker arrives in Nuuk, Greenland after transiting the NW Passage, in a photo he shared on Twitter. 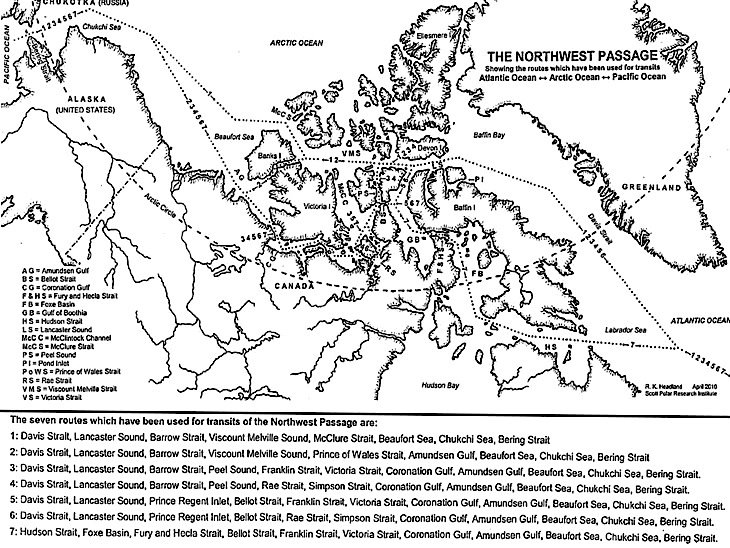 You can see the “route 3,” used by two Finnish icebreakers to make a successful late-season transit of the Northwest Passage (MAP/ SCOTT POLAR INSTITUTE)

The Fennica, a multipurpose icebreaker and platform supply vessel, and the Nordica, also equipped with a 160-ton crane, entered the Dolphin and Union Strait eastbound in their NW Passage voyage Oct. 21, travelling on “route three,” one of seven routes that can be used to travel through the High Arctic.

“Heading INTO the #Arctic Ocean this time of year ISN’T crazy if you onboard a well built ship like MSV Nordica and Fennica,” said Nordica’s ice pilot and navigator, David (Duke) Snider, in a tweet about the voyage, which started in Alaska.

It’s not the first time the two Finnish-made icebreakers have made late-season Arctic trips: in November 2012, the ships became the first Finnish icebreakers to sail through the Northern Sea Route, when the vessels returned to Finland from Alaska for the 2012 icebreaking season.

But this is the first time the Finnish icebreakers headed straight through multi-year sea ice into the waters of the Northwest Passage, said an Oct. 26 news release from Arctia, which owns the two icebreakers.

“Compared to the traditional commercial route connecting the Pacific and the Atlantic through the Panama Canal, the Northwest Passage is significantly shorter, saving both time and fuel,” the company said.

“This journey also offers Arctia a unique opportunity to cooperate with Canadian partners, observe multiyear ice on the route, and demonstrate the performance and operability of Finnish icebreakers even in the most demanding Arctic conditions.”

Arctia noted that the Fennica and Nordica meet strict requirements on environment and emissions, making the icebreakers “an ideal choice for operations in the Arctic,” where ship emissions, which can produce heat-absorbing soot, are known to contribute to warming.

Despite the impacts of warming on sea ice, there’s still a lot of thick, multi-year ice to be found in the channels between the High Arctic islands, even in the warmer months, a recent study said.

And although overall Arctic sea ice extent came in well below average for this time of year, the Northwest Passage was still clogged with ice, even in August.

Along for the icebreakers’ October NW Passage transit — scientists and a pair of journalists from Kauppalehti, a Finnish business newspaper, were also on board the vessels, where they blogged about their experiences.

In 2013, Fennica and Nordica also chose to return to Finland via the Northern Sea Route above Russia.

But this year, after the Sept. 28 decision by Shell to stop drilling in the Arctic to “cease further exploration activity in offshore Alaska for the foreseeable future, citing “disappointing” exploration outcomes, Arctia decided that the icebreakers, hired in 2011 as ice management vessels for Shell in the Chuckchi sea, would travel back to Finland through the NW Passage.

Due to their support for Shell’s Arctic oil drilling operations, the two icebreakers had become a focal-point for environmental protesters.

In 2012, to protest Shell’s drilling operations Greenpeace activists managed to board the Nordica in Helsinki harbour before the icebreaker headed to Alaska.