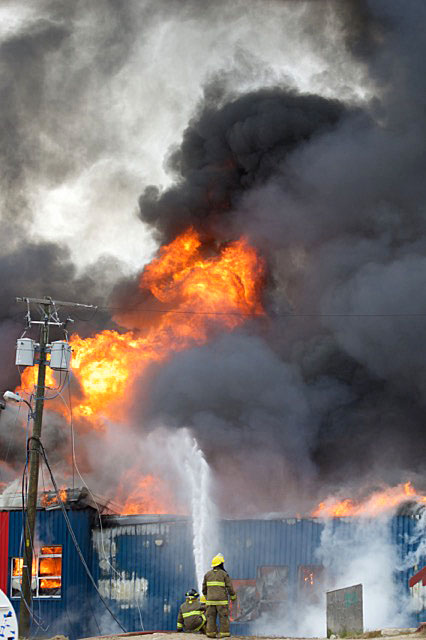 The fire that burned down Peter Pitseolak school in Cape Dorset Sunday morning has affected more than just students and teachers. Government of Nunavut IT equipment, housed in the building, has been destroyed, knocking out local government email and internet service. The school also housed a daycare which must now find new space to operate. (PHOTO BY JOHN CORKETT) 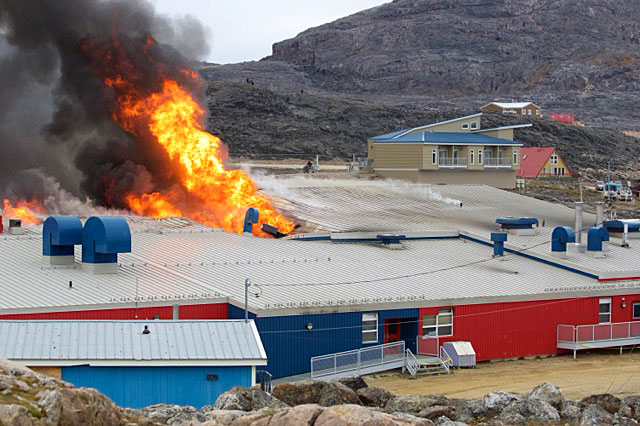 Flames eat through the roof of Peter Pitseolak High School in Cape Dorset early Sunday morning, Sept. 6. The cause of the fire is still unknown but the school has been completely destroyed. Officials are now scrambling to figure out how to teach 170 or so students in a school year that got underway a few weeks ago. (PHOTO BY JOHN CORKETT)

And while everyone is still in shock that Peter Pitseolak High School has been reduced to ash and cinders, the focus must soon shift from grief to work in order to ensure high school students can still get an education this year.

“It does feel like the community lost a resident. Well, I guess Peter Pitseolak was a person so in a way, his spirit has burned down and is no longer there,” said David Joanasie, reached in Cape Dorset Sept. 7.

“It’s going to take years for a new school to be built, but in the meantime, the approach is to look to how can we help the situation,” he said.

“We’ll need to hike up our sleeves and get down to work. It’s going to be tough, that’s for sure. Supporting each other is all I can offer our community. One person can’t fix this problem. It’s a community effort.”

According to community reports, Peter Pitseolak High School in Cape Dorset caught fire shortly after midnight on Saturday and burned into Sunday morning, Sept. 6. As far as Joanasie knows, no one was injured or killed in the fire that completely destroyed the building.

Joanasie, himself a 2001 graduate of the Cape Dorset school, said firefighters and other first responders did a commendable job fighting the fire, but eventually lost the fight as flames engulfed the building.

The timing of the loss is particularly devastating, Joanasie said. Just the night before, Cape Dorset residents had packed the school’s gymnasium to celebrate this year’s graduating class.

Family members, friends and neighbours all came out Sept. 4 to congratulate Carmen Rowsell, Arnakadluk Pootoogook, Taiann Hayward and Josephie Saila for earning their high school diplomas, said Joanasie, who made a speech at the ceremony.

They had no way of knowing they would be the final class to graduate from that school. What a contrast in emotion, Joanasie said, from the hope and joy of Friday night to the sorrow of Sunday morning.

“It’s a big thing in their life. All their families were looking on,” said Joanasie, who delivered a speech at the event.

“I told them take this time to reflect and remember this moment. No one can take it away from you. It’s yours to keep. And I told them I too remember looking up to my older siblings and people who had graduated from high school and there are kids here now, looking up to you.”

“I’m sure for them, it must be that much more of a shock, just so black and white in a matter of one night.”

Named after the renowned photographer and artist Peter Pitseolak, the school was built in the 1960s and was renovated several times including just a few years ago when the Government of Nunavut spent more than $17 million to build a new full size gymnasium with bleachers.

The GN put out a news release Sept. 7 saying that as a result of the fire, government IT infrastructure, which was housed at the school, has been destroyed.

This means “all data communications for the GN, both within the community and to/from the community, are off-line until further notice.” This includes Cape Dorset government internet access, email and voice conferencing.

Replacement telecommunications equipment, once it arrives in town, will be installed at the health centre, the GN news release said.

The hamlet office and a bed-and-breakfast were still without power as of Sept. 7 and Qulliq Energy Corp. staff were expected to arrive to fix the problem.

Joanasie said the school was the biggest structure in town and was used for feasts, celebrations, concerts and sporting events. That’s why it’s such a huge loss he said, not just for teachers and students but for the whole community of about 1,400.

The school also housed a childcare centre, he said, which will now have to scramble to find space.

Community residents were awaiting the arrival of GN education department officials Sept. 7 who were expected to locate and assess potential classroom space for the 170 or so Grade 7 to Grade 12 students displaced by the fire, Joanasie said.

In a news release late in the evening of Sept. 7, the Nunavut government announced the following short- to medium-term steps:

• on Tuesday and Wednesday, Sept. 8 and 9, Sam Pudlat school will follow a normal schedule and no classes will be held those days for Peter Pitseolak students;

When that schedule starts, high school students will, in the short term, use supplies available at Sam Pudlat school, the GN said.

In the near future, high school students will use supplies — including textbooks and workbooks — that the GN will fly in from the Department of Education warehouse in Iqaluit and officials will continue to look for ways of providing classes to displaced high school students.

“Officials will continue to work with the community and the Department of Community and Government Services to explore other options for providing classes to Peter Pitseolak students in the medium to long term,” the GN release said.

And on the evening of Sept. 8, Education Minister Paul Quassa and Kathy Okpik, the deputy minister of education, will fly in from Iqaluit to meet with the Cape Dorset district education authority.

“I do feel for the community of Kingait. Losing a school in any of our communities is a devastating event,” Quassa said in a statement.

On the evening of Wednesday, Sept. 9, the two officials will meet with the parents of students at both Cape Dorset schools, the GN said.

Joanasie stopped by a meeting of teachers on the morning of Sept. 7 to offer his condolences for all the materials and personal belongings they lost in the fire and to say that he will support them in whatever way he can.

“We just need to keep the lines of communication open. I know it’s touched people’s hearts outside of our community and even beyond Nunavut so there’s support that’s already coming and we need to stick together through it all,” he said.

Joanasie said he will also be working with his fellow MLAs and staff at the education department to figure out how to get a new school into the territorial government’s capital plan.

Cape Dorset is in need of other infrastructure including a health centre and housing, Joanasie said. It’s unclear how or whether a new school will jeopardize that spending.

“Everybody’s been taken aback, just trying digest it. It’s hard to put it all into words. It’s devastating to say the least.”

The cause of the fire is not official yet. Nathaniel Watson, the assistant fire marshal for South Baffin, is on the scene and investigating, as are investigators from the RCMP.

Unconfirmed reports say that the fire may have been caused by youth sniffing gas at the school and that some of those youth might now be in custody.

“Word is going around that it was kids who had, either intentionally or not, caused it. I’m pretty sure there had been a teen dance there that evening,” Joanasie said. “I’m sure there are a lot of questions and clean up that needs to happen.”

As of Sept. 7, government officials were looking to hire a few local security guards to monitor the site, which was still smouldering and dangerous, the MLA said.

Neither the RCMP media relations nor the fire marshal’s office were returning phone calls Sept. 7.

But fundraising efforts have already begun. You can donate to the school’s education fund online here.