No tenants occupied the building at the time of the fire 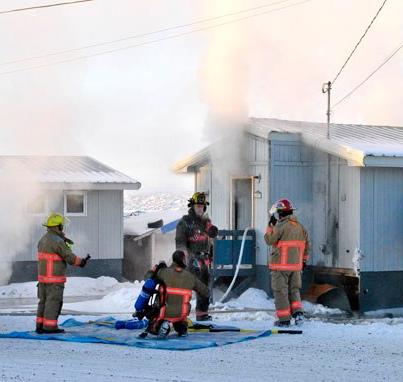 Firefighters respond to an early-morning fire at House 1004 March 9 in the Lower Base area of Iqaluit. (FILE PHOTO)

Fire ravaged the inside of an unoccupied social housing unit, Building 1004 in the Lower Base area of Iqaluit, on the morning of March 9, Luc Grandmaison, Iqaluit’s fire chief said.

When firefighters, responding to a call, arrived at the house just after 6 a.m., heavy smoke was already billowing out of windows and fire was spreading through the floor boards.

The fire, which took about six hours to put out, is not deemed suspicious, but the cause of the fire is still undetermined, Grandmaison said.

No one was inside the house, a family dwelling of two or three bedrooms, at the time of the fire.

“Nobody was left homeless because of that [damage],” Grandmaison said.

But two of the 16 firefighters who were at the scene of the fire injured themselves by slipping on ice.

“It was a hard fire to extinguish because of its location,” Grandmaison said.

The fire started by burning through and into the floor area, and then spreading through the walls of the house in concealed areas.

That’s why it took so long to extinguish, Grandmaison said.

Grandmaison said people should make sure they have working smoke detectors installed in their homes so that the fire department can respond to calls as early as possible.