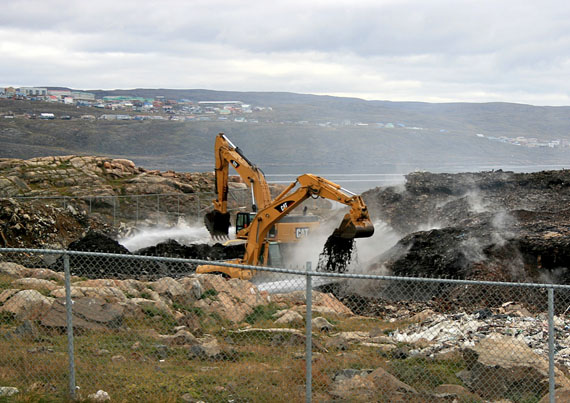 Fire crews dousing Iqaluit’s now four-month-old dump fire have now reached its most dangerous portion and fire-fighting operations are progressing on schedule, the city said Sept. 8 in a press release posted on its Facebook page.

But despite the high heat and the height of the burning pile, smoke monitoring shows little or no particulates are leaving the landfill site, the city said.

Alberta-based Global Forensics Inc. and contractor Hellfire Suppression Services have been battling the fire since Aug. 31.

Over the last week, firefighters have worked to reduce the height of the pile to five metres by removing sections, piece by piece, to quenching ponds, while continuously dousing the smoking heap with massive amounts of water.

On Sept. 7, crews constructed a new drafting pond at the main entrance of the dump, beside the causeway road.

The new pond and its water use are authorized under the Nunavut Waters and Nunavut Surface Rights Tribunal Act, the city said.

That’s the federal law that covers the Nunavut Water Board. In theory, the NWB is the regulator responsible for issuing water licences that are supposed to impose environmental terms and conditions on municipalities in Nunavut.

The Department of Aboriginal Affairs and Northern Development is theoretically responsible for doing inspections and enforcing the water board’s licences.

In reality, Iqaluit’s water licence is expired and won’t likely be renewed until after the water board approves the city’s plan for a new landfill site about 8.5 kilometers northwest of the city.

“The water that had been in the existing retention pond was tested and found acceptable for release to the ocean, as reviewed by [Aboriginal Affairs and Northern Development Canada,]” said Mike Noblett, the site manager with Global Forensics, in the city’s release.

“This will enable fire crews to re-use the contaminated water for extinguishment purposes,” Noblett said.

While the road leading to the causeway is still open, residents are asked to stay away from the landfill site until the fire is extinguished, the city said. That should happen by Sept. 30.

In the meantime, regular household garbage pick-up will continue, the city said.