Airline proposes to expand facilities at both Iqaluit, Ottawa airports starting this year 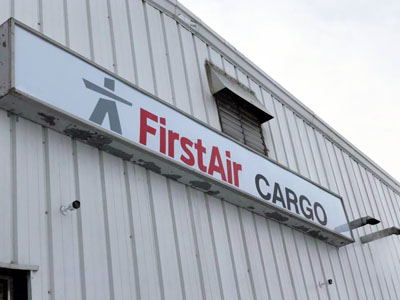 First Air has applied to a federal fund for over $20 million in grants to expand its cargo families in both Ottawa and Iqaluit. (PHOTO COURTESY OF FIRST AIR)

First Air is applying to a federal fund for over $20 million to expand its cargo facilities in Ottawa and Iqaluit.

The fund initially identified northern communities as a priority.

First Air says it shipped 19.4 million kilos of freight cargo out of Ottawa to communities across the Arctic last year, including food, mail and medical supplies.

But the airline expects its cargo demands will increase by over 28 per cent over the next five years. Last year, the airline won a contract from Arctic Co-ops Ltd. to supply its stores, a contract previously held by Canadian North.

To prepare for that growth, First Air has applied to expand its cargo facilities at the Iqaluit airport, a move it says would help with the flow of goods to more than 11 smaller Nunavut communities.

The project would entail building a larger warehouse to store freight, increasing refrigeration capacity and adding new radio frequency identification, the airline said in a news release on Tuesday, Jan. 23.

The cost of the project is estimated at $17 million; if the funding is approved, the work in Iqaluit could begin later this year.

In Ottawa, First Air has partnered with the Ottawa Airport Authority and Aeroterm—which manages Ottawa’s FedEx shipping operation—to apply for an $8 million grant to expand its warehousing and refrigeration capacity at that airport.

To move the project forward, the Ottawa Airport Authority has proposed to realign a local road to facilitate the expansion of First Air’s existing maintenance hangar to the east. Aeroterm would then take over the airline’s existing cargo warehouse, First Air said in the release.

The complete project is estimated to cost $17.5 million. If the airline receives its funds, work could begin later this year and continue through until 2021.

Proposals for the National Trade Corridors Fund were due in November, though recipients have yet to be notified.

The fund will distribute $2 billion over 11 years, the federal government announced last year, including up to $400 million in dedicated funding for northern transportation infrastructure.

An earlier version of this story contained incorrect information about the volume of cargo that First Air shipped from Ottawa last year. The correct figure is 19.4 million kilos.