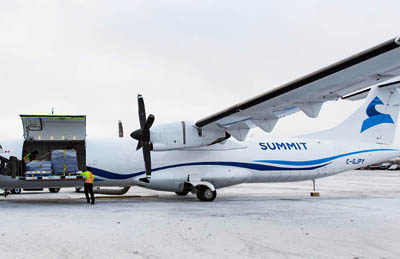 Summit Air’s freighter ATR, pictured, is an aircraft First Air may use to supplement its own fleet as part of a renewed agreement between the new airlines. (PHOTO COURTESY OF SUMMIT AIR)

First Air has renewed an agreement with Summit Air, which will expand its use of the charter passenger service across the Arctic.

In recent years, First Air made use of the Yellowknife-based airline’s RJ85 jet on its scheduled flights out of Edmonton.

But since the airline cut ties with its codeshare partner Canadian North last November, First Air has looked to expand its fleet.

Under the new, four-year agreement, Summit Air will continue to provide charter passenger service, as well as Summit Air’s ATR 72 freighter aircraft to supplement First Air’s own ATR fleet, the airline said in a Jan. 23 release.

“Over the next four years, First Air will continue to use the Summit Air RJ aircraft fleet as we look to further optimize routes to best serve market demand and to meet our customers’ needs,” said Brock Friesen, First Air’s president and CEO.

Both airlines suggested “potential growth and expansion in the future” in the release.