“There is still more work to do,” minister says 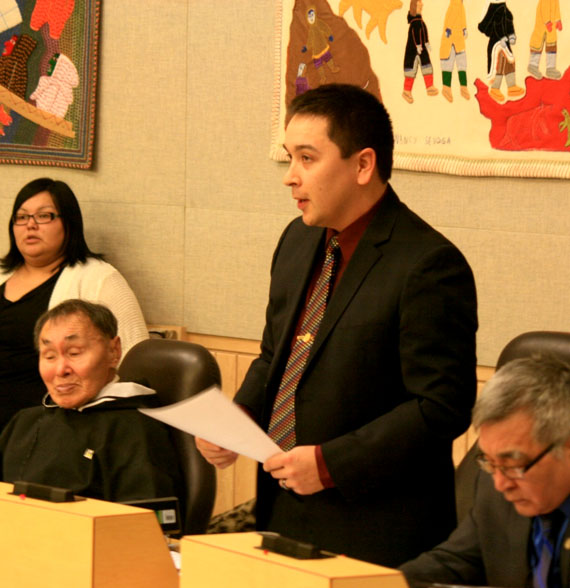 David Joanasie, MLA for South Baffin, asks Tom Sammurtok, the minister of Community and Government Services, about the status of Nunavut hamlet’s water licenses, Feb. 26 in the legislative assembly. Sammurtok announced earlier that the federal government credited five hamlets, including Cape Dorset and Kimmirut in Joanasie’s constituency, for bringing their licenses into compliance. (PHOTO BY PETER VARGA)

Nunavut’s minister of Community and Government Services, Tom Sammurtok, happily announced a small victory Feb. 26 in the big struggle to bring the waste management and water use practices of Nunavut hamlet’s into compliance with their water licences.

The federal department of Aboriginal Affairs and Northern Development Canada, which oversees and enforces the licenses, recently withdrew warning letters to five hamlets that were not complying with their permits.

“A tremendous amount of work has been done to put together a strategy that will benefit all municipalities,” Sammurtok said.

“Although there is still more work to do to bring municipalities into compliance with their water licences, this is a step forward in the right direction.”

Aboriginal Affairs’ notices of warning, or “letters of direction,” dated back to 2012, Sammurtok said.

The letters ordered his department of Community and Government Services and the five municipalities to bring their operations into compliance with their water licences.

CGS is responsible for water, waste management and most other infrastructure in Nunavut’s hamlets.

The department reported last November that 16 of Nunavut’s 24 hamlets were in breach of their permits.

The Nunavut capital, Iqaluit, also was — and still is non-compliant — which means fully 17 if Nunavut’s 25 municipalities are in breach of waste management standards.

The group has been “collaborating to identify common concerns surrounding solid waste practices and water compliance that affect all Nunavut municipalities,” Sammurtok said in his member’s statement at the start of the assembly’s Feb. 26 sitting.

David Joanasie, MLA for South Baffin, which includes two of the five communities that improved compliance, questioned the extent of the problem.

“What are your plans for those communities so they can keep their water licence?” he asked.

“Are all communities in compliance with their water licences?” Joanasie asked.

“The five communities are the ones that required the most work. But there are other ones that were not in compliance,” Sammurtok replied.

“We’re still working with the department [AAND] so that all communities can be water-compliant,” he said, adding “that’s water and sewer compliance.”

Sammurtok said the water compliance working group has mapped out short to “long term work plans” to bring all municipalities in line.

“We anticipate that the short term plans will start to be implemented in all Nunavut municipalities in the 2015-2016 fiscal year,” he said.