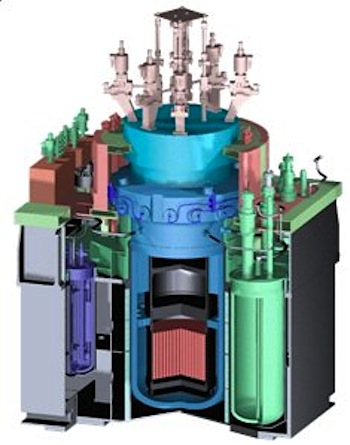 A nuclear reactor like this could supply all the power, and then some, that a mine needs, delegates to the Nunavut Mining Symposium heard April 16 in Iqaluit. (IMAGE FROM OKBM) 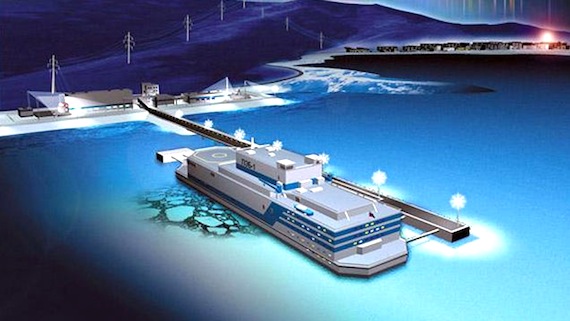 Here’s an artist’s depiction of a floating nuclear power plant that could provide power to mines in Nunavut, be modified to serve as floating desalination plants or serve as a power source for a community in an emergency situation. (IMAGE FROM OKBM)

Mining projects in Nunavut are saddled with high expenses that could discourage development.

With that in mind, why not go for a tried and proven cheaper source of energy that can come and go on the high seas, and reach the territory’s coastal communities?

Nuclear power generators have been cruising the high seas in the ships of the world’s biggest navies since the 1950s, Peter Lang, president of Dunedin, told an audience at the symposium.

“Since then, civilian applications have come along,” Lang said during his presentation, adding that icebreakers and carriers powered by nuclear energy also sail the high seas.

A generator on a ship can produce more than enough for the largest mines now operating in northern Canada, at a fraction of the cost that diesel-fuelled power generators require, he said.

A Russian nuclear engineering company, OKBM Afrikantov, has taken a lead on the idea of adapting such technology to supply power for Arctic communities, Lang said. The firm is now building a floating nuclear power plant for an Arctic port town of Pevek, in northeastern Siberia, which has little more than 4,000 residents.

“Clean, safe, and portable energy is absolutely key to mine profitability, and the current diesel [power generation] model is not sustainable for the scale of development we want to see,” Lang said.

“I think that small, floating nuclear power plants can work toward a solution, and be a part of the energy mix.”

Floating power plants “can really do the heavy lifting and dramatically cut diesel costs and environmental costs,” he said.

Lang reminded that all six operating mines in Nunavut and the Northwest Territories rely on diesel-fuelled power, as do all communities of Nunavut.

“There are some good reasons why diesel was brought in originally,” he said.

The cost of running mines in remote northern locations is multiplying, however. Oil prices will continue to go up in the long run, and “oil is the most politically sensitive commodity out there,” Lang said, pointing to instability in some of the world’s biggest oil-producing regions.

Added to that are ever-increasing costs of transporting fuel to remote locations, global warming and pollution.

Floating nuclear plants do not carry any such costs. They would not throw any greenhouse gases or particulate air pollution, such as soot or “black carbon” into the air either, Lang said.

Nuclear energy produces several times as much energy for a fraction of the cost. Costs of power generation on floating plants are calculated to range between 15 and 30 cents per kW-hour, Lang told Nunatsiaq News. Consumer power rates in Nunavut are more that 70 cents per kW-hour.

The floating power plant sits in the water as a non-permanent installation, which makes it easier and less costly to dismantle when a mine closes down.

“It’s just a case of towing the thing away, back to its home port, and there is no residual radioactivity left,” Lang said. “You just have to dismantle the shore distribution facilities, is all.”

OKBM’s floating plant in Russia’s Arctic will house two nuclear generators, producing up to 35 megawatts of electricity each, for a total peak output of 70 megawatts.

For comparison, the diesel plant at Agnico Eagle Mining Ltd.’s Meadowbank gold mine in Nunavut has a generating capacity of 26 megawatts, and the City of Iqaluit’s power plant has a capacity of about 12 megawatts, Lang said.

Unfavourable economic conditions in recent years have put Canadian mining operations in “cost-control mode,” Lang noted, and with that in mind, many are looking to decrease costs.

Floating nuclear plants offer an obvious solution, although he admitted “there’s no one silver bullet that’s going to solve everything.”