“We still hear stories about how people aren’t seen right away some times.” 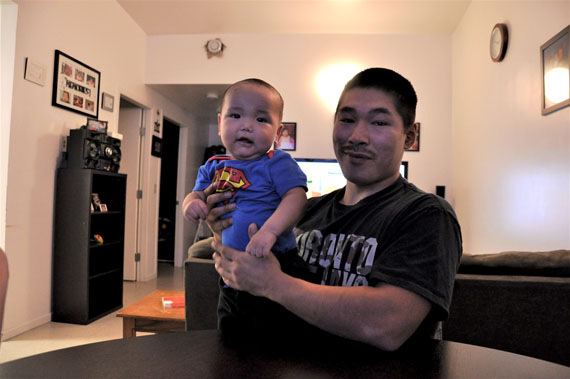 Luutaaq Qaumagiaq with his eight-month-old child, Lucas. He said he and his partner Neevee Akesuk still don’t trust the GN health department. (PHOTO BY THOMAS ROHNER)

For Cape Dorset parents Neevee Akesuk and Luutaaq Qaumagiaq, more than four years of heartache and anguish caused by the death of their first-born infant son came to a head Nov. 25 in only nine minutes.

That’s how long it took the jury leader at the coroner’s inquest into the 2012 death of Baby Makibi Akesuk to read the verdict, which said the cause of death cannot be determined.

Moments later, when presiding coroner Garth Eggenberger closed the inquest, the young couple fell, crying, into a deep hug at the Cape Dorset Community Hall, where the inquest had been ongoing since Nov. 22.

Behind them, their eight-month-old baby, wearing a pink and grey plaid shirt, slept peacefully on his back—his arms wide-open—on a big amautik on a bench.

For the parents, the change in cause of death from sudden infant death syndrome, or SIDS—which is a mysterious category assigned when all other possible causes of a baby’s death have been ruled out—to “undetermined” offers some relief.

“We blamed ourselves a lot over his death, but now that it’s been explained we understand more,” Akesuk said from her Cape Dorset home Nov. 27.

“The inquest gave us some answers and made some things more clear for us,” father Qaumagiaq told Nunatsiaq News.

But questions remain for the parents who said, at this point, the inquest has not provided closure.

“Maybe they would’ve medevaced him out, or sucked mucous out of his lungs,” Qaumagiaq said.

And the parents said the Government of Nunavut seems as if it’s still trying to cover up, not just for McKeown, but also for McKeown’s boss at the time of the death, current Igloolik nurse Heather Hackney, and Hackney’s boss in 2012, Roy Inglangasuk.

Both Hackney and Inglangasuk, who no longer works for the GN, knew about many complaints against McKeown but did nothing, the parents said.

The coroner’s inquest, which wrapped up Nov. 25 in Cape Dorset’s Community Hall after four days of testimony from 16 witnesses, produced seven recommendations.

Foremost among these, that a resident doctor be placed in each Nunavut community.

The inquest looked into the circumstances surrounding the death of three-month old Baby Makibi on April 5, 2012.

“On the day of April 4, 2012, Baby Makibi was not well. He had a runny nose, was coughing, had trouble breathing and wasn’t sleeping well. He was bed sharing with a parent and placed on his tummy to sleep,” the jury said in its verdict.

Earlier that night, mother Akesuk testified that she had called the local health centre with those complaints, and told McKeown her baby might have a fever.

Ignoring best practice and GN policies, McKeown told Akesuk to bathe her child and bring him in in the morning, the inquest heard.

The parents also testified how Nunavut’s Chief Coroner Padma Suramala made them feel responsible for the baby’s death by telling them that they should not have been bed sharing with their infant and that the baby should not have slept on his stomach.

Bed-sharing and sleeping on stomachs are both risk factors associated with unexplained baby deaths across Canada, but medical professionals do not understand the connection between the risk factors and the deaths.

Akesuk and Qaumagiaq said that Ontario’s Chief Coroner Dirk Huyer’s testimony on Nov. 25 helped them understand how poorly Suramala communicated with them about SIDS.

For example, Huyer said about 70 per cent of parents share their bed with infants, and there are many positive things about bed-sharing, such as how it encourages bonding and breast-feeding.

And SIDS is a cause of death that should be used rarely and only after a thorough investigation involving different medical professionals, Huyer said.

When asked about best-practice communication when talking to grieving family members, Huyer said to be “compassionate, open, take time and be frank and be accessible.”

The chief coroner’s office was none of those things, Akesuk and Qaumagiaq said.

In the following four years, the baby’s cause of death was changed from SIDS to a common lung infection and back to SIDS.

Those changes were a result of mistakes made by the pathologist who performed the original autopsy on the baby in 2012, the jury heard.

Concerns about the local health centre persist today, in part because of stories in the community like Baby Makibi’s story, the parents said Nov. 27.

“We still hear stories about how people aren’t seen right away some times,” Qaumagiaq said.

Neevee said she called the health centre in recent months when her eight-month old son, Lucas, had a fever.

“The nurse asked me why I waited until after 5 p.m. to call, and I said my son’s fever doesn’t know what time it is.”

After the nurse agreed to assess Lucas in the health centre, the baby was medevaced to Iqaluit for pneumonia, Akesuk said.

“During the inquest, we were reliving everything, so I couldn’t think of all the questions I had.”

The other recommendations made by the inquest’s jury include:

• on-call schedules for nurses be reviewed to ensure nurses have enough rest to avoid fatigue;

• more education for expectant parents during prenatal visits on safe sleep practices; and,

• automatic peer review of all autopsy examinations of children under five years old by pathologists.