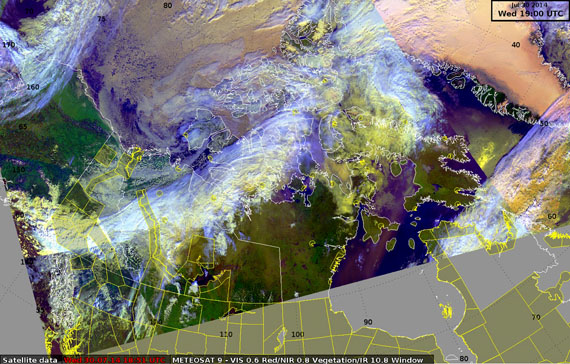 Environment Canada is using satellite imagery, such as this shot taken July 30, to track smoke from forest fires in the Northwest Territories. Smoke shows as faint brown areas around the Nunavut border, at the centre of this image. (COURTESY OF ENVIRONMENT CANADA)

Weather across Nunavut and Nunavik has played out normally so far this summer, although huge forest fires to the west and a short heat wave in the east have already marked 2014 as unusual for some communities.

In July, heavy smoke from more than 200 forest fires in the Northwest Territories carried as far east as Igloolik and Hall Beach, according to Environment Canada.

“The forest fire situation is not abating at all at this point in time,” the agency’s warning preparedness meteorologist, Brian Proctor, told Nunatsiaq News July 30.

“This is the worst forest fire season in the NWT, probably in 30 years.”

Nunavut’s western-most communities of Cambridge Bay and Kugluktuk have taken on the heaviest smoke in the territory so far, Proctor said.

Cambridge Bay’s worst days, July 24 and 25, saw visibility decrease to 1.6 kilometres due to smoke, he said.

A similar haze descended on Kugluktuk, July 23 to 26, which reduced visibility by as much as three kilometres.

“I see the potential of having some more smoke in the western Nunavut communities again, as we move forward,” Proctor said July 30.

Reduced visibility troubles could affect Baker Lake and other communities of the Kivalliq region along the west coast of Hudson Bay, he added, depending on air flow patterns.

“It’s very much wind-dependent, and atmospheric stability-dependent,” he said. “I think a number of communities will be seeing some very interesting red sunsets associated with the smoke that’s aloft.”

Effects on communities about 1,000 or more kilometres downwind of the NWT fires has been mixed.

In central Nunavut, Taloyoak reported smoke “aloft,” or high in the sky, on July 25. Then Kugaaruk, less than 200 kilometres away, reported haze descended on the community due to smoke the next day, July 26.

Not far from Hall Beach, Igloolik reported smoke aloft on July 27. Baker Lake was “hazy and smoky” on July 27 through to the July 30.

In the Kivalliq region along Hudson Bay, Arviat reported smoke July 23, 24 and 28, as has Whale Cove since July 28, Proctor said.

Smoke from forest fires in the NWT billows into higher levels of the atmosphere, where it can drift more than 1,000 kilometres away.

Once suspended aloft, “it’s just a question of where the smoke is going to surface at low levels,” Proctor said.

“That smoke has been fumigating much of the NWT and also through the Prairies, down into Ontario at times, and it’s not looking to improve in the near future,” he said.

“People should listen to local smoke forecasts as we move forward.”

Unlike communities elsewhere in the North, the eastern Arctic’s weather this summer has been marked by a three-day heat wave in Kuujjuaq.

Temperatures hit a high of 31 degrees Celsius each day, shattering older records ranging from 26.1 to 28.7 degrees, according to meteorologist René Heroux of Environment Canada.

Despite the spike in temperatures, July’s average high stood at 17 C, “which is exactly normal,” Heroux said.

Several cooler days that month kept the average at a lower level.

Kuujjuaq’s monthly average for June, however, was six degrees higher than normal – amounting to 18 C compared to the usual 12 C.

The community posted other daily records that month, although none were as high as the all-time record 31 C.

“Overall, when we say climate is warming, especially in the North, this is another (bit of) proof in a list that’s getting longer and longer,” Heroux said.

Just north of Nunavik, the South Baffin region recorded normal temperatures for June and July, according to Proctor.

In Iqaluit, however, the start of summer was marked by more rainy days than usual.

Some 73 millimetres of rain fell in the Nunavut capital in June — more than double the usual 33 mm, Proctor said. Dry weather returned in July, closer to usual norms.

Temperatures have not strayed far from summer norms in Nunavut’s other major communities either, although rainfall has.

Rankin Inlet has experienced drier than normal weather so far this summer. The hamlet’s rainfall ranged from 35 to 40 per cent of usual levels in June and July, Proctor said.

Cambridge Bay on the other hand had normal levels of rain in June, and more than two times its usual 36 mm in July.

Many communities of the Kitikmeot region “have been getting lots of fog and that’s typical for this time of year,” Proctor said.

Fog with rain showers can either wash out or conceal incoming smoke from NWT forest fires, he said, which makes it hard to detect how far the smoke has spread within Nunavut.