The GN “hasn’t made much progress,” Tagak Curley says 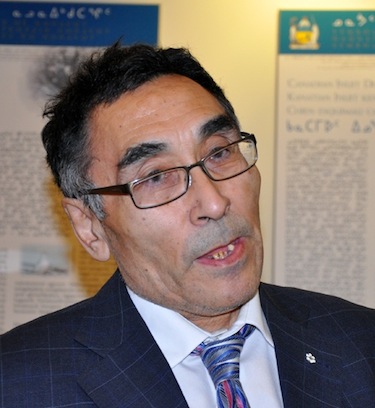 Tagak Curley, Rankin Inlet North MLA and former health minister, said he had “no choice” but to step down from cabinet after heading up the health and social services department since 2008. (FILE PHOTO)

The Government of Nunavut should hold its next election in the fall of 2012, says Tagak Curley, who resigned as minister of health and social services Nov. 16.

The Rankin Inlet North MLA said that he and his fellow Nunavummiut are frustrated with the current government, which he says “hasn’t made much progress.”

“As soon as changes are made, the better,” Curley told Nunatsiaq News Dec. 2. “I don’t think that the public should go through confusing government.”

That’s in spite of an earlier decision by the legislative assembly, sitting as caucus, to give themselves a five-year mandate.

(Caucus is the term used to name the behind-closed-door meetings that MLAs hold among themselves prior to and in parallel with regular legislative assembly sessions.)

This means an election will be held sometime in 2013, no later than October of that year.

Curley’s frustration is evident, weeks after the premier announced his resignation from cabinet in mid-November.

During a cabinet retreat in Iqaluit last month, Aariak and her ministers went through the results of a structural review the Government of Nunavut had commissioned on ways to operate more efficiently.

One recommendation, which called for the division of health and social services into two separate departments, seemed to be the last straw for Curley.

He said dividing the two services, which would then group social services with culture, would lead to “chaos.”

“The services required by vulnerable Nunavummiut, like children, require not just foster care, but assessments of health and mental health,” Curley said.

“The two services really have to interact. Don’t expect me to lead a department only to unravel it after all I’ve done.”

But Curley said he had asked Aariak for a change in portfolio as early as last August, arguing that three years at the helm of health and social services is “rigorous” work.

“I only took three weeks off every year, and I worked from 8 [a.m.] to 5 [p.m.] every day for three years straight,” Curley said. “Unlike some of my colleagues, who take three to four months off every year.”

Curley said he never received an offer of another portfolio, nor would officials agree to hear his argument for keeping the health and social services department as one unit.

“It’s really too late in the game to do anything of this nature,” he said of the department restructuring. “The department was in good health. In the end, it’s a distraction.”

Curley said he had no choice but to step down from cabinet.

Now he’s committed to stay on as an MLA and “make the government as accountable as possible.”