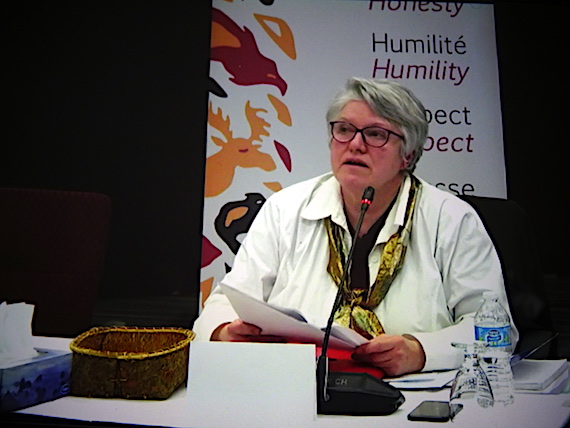 Lorraine Loranger, a retired social worker who worked with youth protection in Nunavik, tells the Viens commission hearing about what she saw in the region. When asked if conditions had improved, she said they could have, but some had told her that they hadn’t. (SCREEN SHOT)

One young Nunavik child was shuttled 56 times from foster family to foster family after being taken from his family by youth protection services: this was just one of the troubling stories recounted last Friday in Montreal at a hearing of the Viens commission.

Lorraine Loranger, a retired social worker, spoke for more than an hour before the commission, which is looking at Quebec’s 15-year track-record in providing health, social services, correctional services, justice, youth protection and policing to Indigenous Quebecers.

Loranger said that, as a result of what she saw in Nunavik, “it’s no wonder Inuit have lost trust in youth protection.”

Loranger detailed some of her experiences in Salluit, where she worked a youth protection worker from 2009 to 2010.

What she saw then reflected a lack of support for families and a harsh attitude on the part of some youth protection workers, she said.

At the root of many situations she dealt was a lack of housing. That meant women remained in bad situations and couldn’t, for example, easily improve living conditions for their children due to overcrowding in their homes.

That overcrowding often saw 20 people sleeping in shifts in a five-room home due to the chronic lack of housing, Loranger said.

The need for more housing in Nunavik to help improve conditions for youth was also cited by Quebec’s human rights and youth rights commission in its presentation to the Viens commission last week.

“Without housing, it will not diminish,” Loranger said of the continuing crisis facing youth and women in Nunavik.

Among the incidents related by Loranger was a decision by youth protection to take a girl—whose mother had injured her with a hairbrush—out of her home to the home of her maternal grandfather.

That was “into the wolf’s den,” Loranger said, because the grandfather had previously sexually abused the girl’s mother when the mother was a child.

At one point, Loranger told how she was told to go door-to-door in a neighbouring community to find a girl, 15, who had fled a group home.

She didn’t find the girl, and suggested to the hearing that involving local elders in finding the girl could have been a more efficient way than sending a “white person” into people’s homes.

Loranger said she lost her job when she refused to apprehend a woman’s new baby.

Overall, Loranger heaped criticism on the youth protection system, which she said also put pressure on children and families in an effort to get them to avoid youth protection.

Police also violated citizens’ rights, she said, and the justice system failed some children who were deemed “unreliable” witnesses.

Loranger also repeated comments made to her by southern workers in youth protection and justice, which, she alleged, sexualized some of her youth protection clients and Inuit women in general.

It is all part of a pattern of “harassment, discrimination and racism,” Loranger said.

To improve conditions, Loranger embarked in 2016 on cross-country walking expedition.

She wanted to raise awareness about the difficult conditions facing Inuit youth in foster care and to push for more safe houses for Nunavik children, women and their families.

Loranger also told the Viens commission that she should have received more training and orientation before arriving in Nunavik.

That point regarding preparation was raised as well in a Friday morning panel session at the commission. It focused on the efforts of medical schools in Quebec to encourage Indigenous students to become doctors.

At four medical schools in Quebec, there are now four spots reserved for Indigenous students who might not otherwise make it into the highly competitive medical schools. None who have entered that program to date are Inuit.

Cyr also said that the training which medical students receive should be less theoretical and more grounded in reality.

He said training needs to step away from offering stereotypes and teach doctors how deal with Indigenous patients who might not suffer from substance abuses or infections like tuberculosis.

And he’d like to see Quebec’s medical curriculum include a component on traditional Indigenous medicine.

The commission hearings continue this week, and you can follow the open proceedings online on the commission’s website.

On Wednesday, issues concerning Nunavik and Inuit will once again dominate most of the hearing’s discussions: